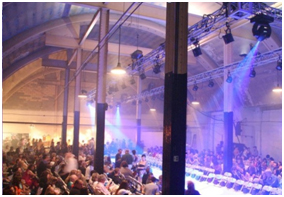 Smart Thing 1: You can Score a Touchdown Versus T-rex, Neanderthals

Now that we’re deep into football and just cranking up hockey season, it only makes perfect sense for the Science Museum to schedule its “Science of Sports” exhibit now. From the museum’s website:

“Aside from being competitive, sports are a complex equation of math, physics and biology. Learn why Science is the M.V.P. on any field, rink, diamond or court. From the physical impact of collisions to the technology behind how hockey ice is created, science plays an integral role in every highlight reel and play-by-play.”

With the help of your favorite Buffalo sports teams, players, and coaches, get an interactive lesson on The Science of Sports through friendly competition and fun.”

Plus, there are plenty of dinosaurs and Neanderthals to look at.

The exhibit will run until January 6.

Smart Thing 2: Art Scene Converges to turn the Disused into the Re-used

It’s a “mega-party sensory overload” of artists and entertainers – “Hallwall’s Artists and Models” annual fundraiser has drawn crowds of money toting folks to a variety of disused buildings around town in past years.

This year’s event took place at the Pierce Arrow building on Elmwood, “A giant vaulted room where Rick James used to fire his gun after band practice – you can still see the bullet holes in one of the doors!”

The former bicycle/car manufacturing factory currently houses “a number of light industrial companies, and is a good example of another way in which large industrial buildings from the early twentieth century might be reused.” It is also a part of Preservation Buffalo-Niagara’s Adaptive Reuse SCVNGR Trek.

The lockout is good for at least one group – NHL Prospects:

“Scan the rosters from the 2004-05 American Hockey League season — the highest level of North American professional hockey that year — and it’s a Who’s Who of the NHL.

The skill level was never better, thanks to a season-long NHL lockout. And now, thanks to the second lockout in eight years, it’s NHL Jr., Version II.

The players in will benefit greatly. The AHL is always a proving ground, but now under-the-radar prospects can show they’re capable of playing against NHLers…

For Sabres fans, any good news is pretty darn welcome these days. And so long as the lockout continues, fans desperate for some professional puck will be able to catch the Amerks at the FNC on October 24.