None of this matters. 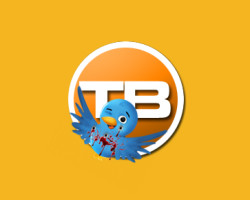 This week, Trending Buffalo sent out its 4000th tweet. They haven’t all been memorable, few would be considered important, and we may even regret a couple. Bottom line– it feels like maybe we talk too much.

In the interest of quality control, we took a look at some of the most prominent and prolific local tweeters along with a couple of (inter)national celebrities (and The Weather Channel) to see if our numbers look OK. Basically, if you’ve got “Buffalo” in your Twitter handle, there’s a good chance you were considered for this study.

We used 5 categories to assess our self-worth. 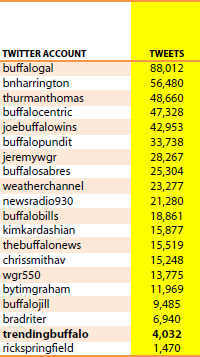 Follow too many and the good stuff gets lost in the noise. Follow too few and you’re not letting enough get to your screen. We try to keep our feed at a manageable-ish 1000 or fewer. It’s higher than most but that’s OK because we’re professionals. 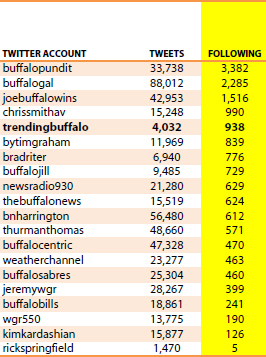 Your number of Twitter followers MIGHT not matter but nobody’s ever said “I wish mine was smaller.” (We wish there was some sort of analogy for this.) In a world of artificial enhancement, this number won’t tell you everything but it certainly helps to gauge level of influence. The Bills are better than the Sabres. Tim Graham is better than us. We’re better than Brad Riter. Kim Kardashian is better than everyone. 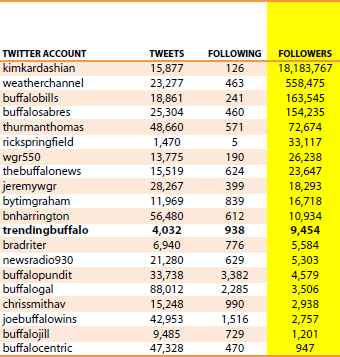 Take your number of tweets, divide them by your number of followers, and then ask– am I talking too much? At less than half a tweet per follower, we’d say we’re not. (Does 50 seem high to you?) 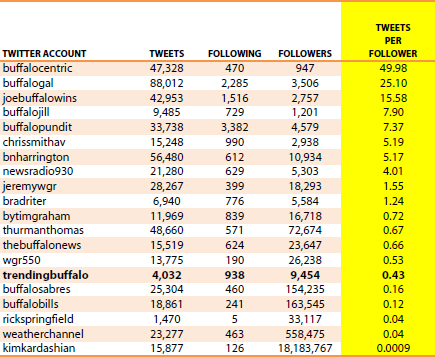 Take your number of followers and divide that by the number of people you follow. If we treat Twitter as a zero-sum game (note: we’re probably using that term incorrectly),  a tweet from The Weather Channel is about 1200 times as significant as a tweet by one of its followers.

This is essentially an arrogance meter– a low number means “I’m here for conversation and to learn from others” (Alan Bedenko) while a high number means “I just had a baby and named it North West and I don’t care what you think about that or anything else.” (Jeremy White)

Trending Buffalo registered a 10.1– a fair representation of our collective ego since we consider our statements to be 10.1 times as important as yours. Our level of arrogance is roughly half that of Mike Harrington although that gap is likely to narrow as we move past him in followers. 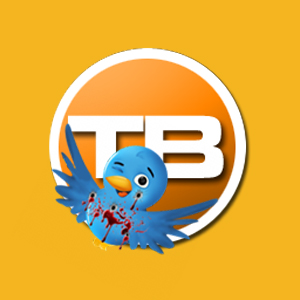 What have we determined?

If you tweet more or less frequently than we do, you’re doing it wrong.

If you have more or fewer followers than we do, you’re doing it wrong.

Also, we have a bit of an ego.

Thanks for following us for 4000 idiotic tweets. We hope you stick around for the next 4000.