Recently I (impulsively) bought a bottle of what I thought was grapefruit juice. I bought it because, as a quick glance at the front revealed, it would contain, you know,…

Did they close the FDA down or something?

Recently I (impulsively) bought a bottle of what I thought was grapefruit juice. I bought it because, as a quick glance at the front revealed, it would contain, you know, 100% Ruby Red Grapefruit juice (see, Product, Front). I based this on the fact that the product says that it  is 100% Juice and that it says Ruby Red Grapefruit. Where those two meet, I am good. Or so I thought. 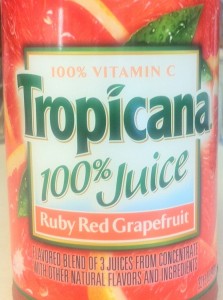 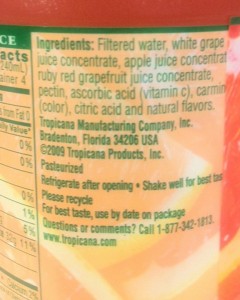 This misguided purchasing decision was based on the belief, I suppose, that we have a government agency somewhere actually regulating just how outrageously deceptive the front of product packaging can be.  Clearly, this belief is misplaced, because not only does this thing taste like the evil spawn of Sunny D meets Tang, but the ingredients label on the back bears almost no resemblance to what’s on the front. None.

Really? The number one ingredient in 100% Ruby Red Grapefruit juice is filtered water? Okay, so maybe I can allow that if you concentrate the juice, then re-hydrate it with filtered water, you’re still delivering the promise of 100% Ruby Red grapefruit juice? And if this was the deal, I could live with that. So, let’s look at ingredient number two.

Wtf? I already said I would let the whole “concentrate” thing slide, and now you’re thinking I’m such a pushover you can say “grape” without “fruit” immediately after and I won’t notice that you totally changed fruits on me? No. So, clearly, you guys are going to try and get away with everything you can here. Which is why the next ingredient is not a total shocker.

Part of me knew this was coming. When you can call a grape a grapefruit I suppose there’s nothing stopping you from creating a committee where anything with a seed in it can call itself grapefruit. Really, I should be happy that it’s not corn juice or whatnot. So, you know, thanks.

Hey, look at you. I almost forget you were invited. And here you are, only fourth on a guest list to an event that was supposed to be entirely in your honor. You must be so proud.

I’m not even going to get into the rest of the crashers here. Suffice to say that their call out should indicate that all this 100% nonsense on the front seems like a tragic lie.