You Will Not Find Love On Craigslist

We’ve done this before but it’s time to revisit Missed Connections.

It can also be incredibly interesting. The section called “Missed Connections” is full of stories of unrequited lust. Go check it out. We’ll wait.

Sadly, there’s a fatal flaw in nearly every tale. Today, we break down a few of these “relationships” and point out why they seem unlikely to succeed.

For the uninitiated, each headline typically includes the following information: 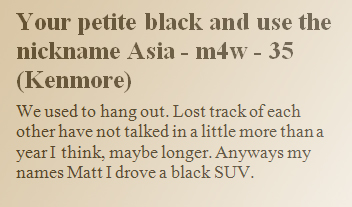 You know who uses the nickname “Asia”? Hookers and strippers, Matt, that’s who. She’s not any more interested in you now than she was a year (maybe longer!) ago. Also, Sales 101– there’s no call to action here. Let’s say “Asia” finds this post and finds it compelling because she misses you tremendously. Then what? You didn’t even establish a game plan. Weak, Matt. Weak.

Anonymously posting your willingness to serve as a dime store psychiatrist to the emotionally distressed doesn’t seem to validate your claim to be a straight-forward guy. Quite frankly, you don’t seem nearly as trustworthy as you thought you would when you finished typing up this ad. Back to the drawing board.

Your use of a capital D implies that Destiny is a name, rather than just a hopeful prediction of your future together. Assuming this is true, Destiny (probably not a real name and probably a stripper or a hooker) knows where she works (strip club) and probably knows what she wore (thong and pasties), too. Now she has to pass an online quiz for you? You’re not really in a position to make her work for it. 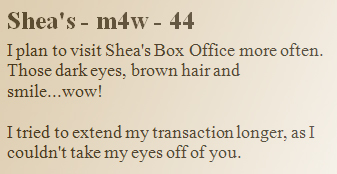 Classic Craigslist case of “I know exactly where I can find you if I’d like to speak with you again but instead of following that route, I’ll write a note, drop it in this bottle, toss it into the ocean, and hope you’re strolling on the beach when it washes ashore.” You’re a classy guy, what with your frequent trips to the theater and all. Use that. You’re better than this.

You don’t understand the internet. She wrote to you on Facebook. Write back to her on FACEBOOK. 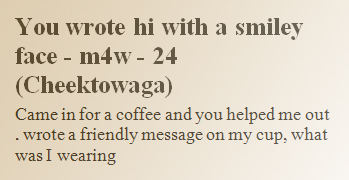 Girls use smiley faces. This is not a sign and it’s certainly not an indicator of her desire for a relationship. She drew a smiley face on the cup of the guy before you, the cup of the girl after you, and the check she wrote to her landlord on Tuesday. Are you also amazed every time you wake up and the sun is shining? Also, “what was I wearing”??? If it wasn’t a tuxedo, a kilt, or a banana costume, she doesn’t remember. Nobody does. 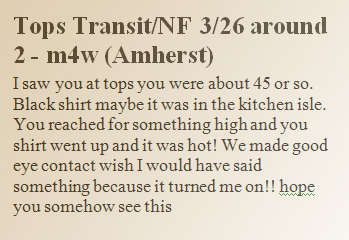 So, she wanted something on the top shelf AND you guys made eye contact? Actually, this one has potential. 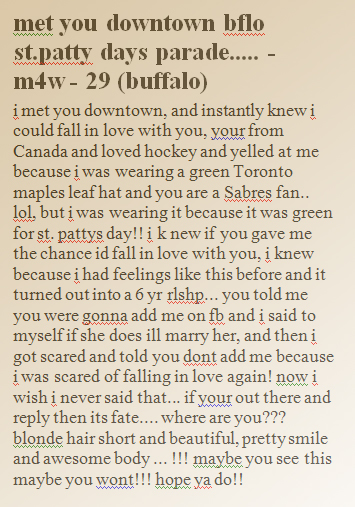 You talk too much. Tighten it up, pal, and back WAY off on the love and marriage stuff. Also, you lost any opportunity your drunk ass had when you specifically requested that she NOT become your “friend” on Facebook. The only thing that trumps “I’m scared of falling in love” on the “get me away from this freak” scale is tacking on the word “again.” You blew this badly and there’s no bouncing back.

If anyone has a story of “missed connections” ever working at all, we’d love to hear it.