Juan Full Hour of Nothing!

Hey, America! Do you like nothing? Then, settle in for an hour-long special of nothing. It’s nothing. I watched nothing tonight.

It’s Countdown to Juan Pablo! He’s the next Bachelor. ABC has been calling it Juanuary, instead of January. It’s a Juanderful pun.

Because ABC was nice enough to air a ‘Get to know Juan Pablo’ episode of ‘The Bachelor’, we get behind the scenes coverage of the soulless selection of contestants, footage of Juan Pablo’s daughter playing and more stuff. It’s a Juander I made it through the entire hour. I was going to call it an “Juor” but I didn’t think you’d make the connection that I was making the word “Juor” into “hour”. How are you guys liking the ‘Juan’ replacement word game?

I could stop, but then you’d go through withdraJual. You’d need medicatJuan. It’d be Juawful. My computer doesn’t think ‘medicatJuan’ is a word.

I didn’t need a ‘Get to know Juan Pablo’ episode because I went on ABC’s website and read this:

“With his Spanish accent, good looks, salsa moves and undying devotion for his daughter, Juan Pablo, 32, was a fan favorite. Sadly, Desiree Hartsock couldn’t see a future with Juan Pablo and sent him home from Barcelona. Although he was blindsided by not getting a rose, the experience of being on The Bachelorette opened his eyes to the possibility of finding a real, everlasting love. He can’t give up on love and on giving his daughter, Camila, what she wants more than anything else in the world – a brother and a sister to complete their family. Juan Pablo is ready and hopeful that he’ll find love and the missing puzzle piece to fulfill his family here on The Bachelor.”

In case you were smart enough to not read that paragraph, it basically says that one of the 25 women on this season of the Bachelor need to provide Juan with an additional girl and boy for his family. It sounds like medieval land trading-type stuff. I wonder if, at the end of the season, ABC makes the winner sign a form, promising that she’ll bare a boy and girl for Juan Pablo. Did you guys read down this far?

On to the recap.

First, we get sneak peaks of the videos sent in by some of the Bachelor contestant hopefuls. They are as pathetic as you would imagine tapes of Reality TV show hopefuls would be. One of the girls talks about her eggs. Some let their grandmothers talk. I’ll bet the guy who has to screen these videos drinks.

One of the women sits in a hot tub drinking a gallon of wine. I would have picked her.

Next, we see Chris Harrison’s training camp. He interviews girls that have the best agents and who made it to a certain point. Harrison asks tough questions like, “What do you want?” The girls answer. It’s gripping.

The show finally hits 3rd gear when they reveal some of the contestants. Chris Harrison and his producers jump in SUVs to tell the girls in person. The girls are unaJaure.

The first girl they introduce is Lucinda. She takes the news well. Lucinda jumps up and gets impregnated by Chris Harrison. It’s a full-on straddle jump. Lucinda also goes by the name ‘Lucy’. Her job title is ‘Free spirit’. I hear there’s good money in that.

The next contestant has dogs. It’s Elise. She’s super surprised by Chris Harrison’s visit. She’s so surprised that she’s wearing make-up, diamond earrings and a $4,000 dress. She had no idea they were coming.

Christy says that she can’t believe it’s real to be chosen for the Bachelor. I’m not certain if she is shocked or on LSD. Christy is a bit of a ditz. Christy says that she never would have thought she’D be in this position, which is amazing for someone who applied to be on the Bachelor and went through a series of interviews and callbacks to be on the Bachelor and then received a phone call from producers telling her to be ready to be on camera to be introduced as a Bachelor contestant.

Christy says about Juan Pablo, “I hope his inside is as good as his outside.” Christy should write for Hallmark.

Lauren is next. She’ll last 4 seconds. I’ve had rashes less annoying. Lauren lives in a mansion because they don’t select poor people to be contestants on the Bachelor.

Allison says that she’s “beyond excited” to be on the Bachelor. What’s beyond excited? Is it really excited? Scared? I think it’s scared. Allison is scared. She’s probably even beyond scared but it just needs to sink in. Maybe she’s just a little Juaorried.

One of the contestants stands on the beach and shouts, “I’m coming for you Juan Pablo!” Then, she runs into the ocean. I don’t think she knows where Juan Pablo is. They should have told her.

There are more girls and they talk. Some girl practices Spanish because Juan Pablo is from Peru or something. Chris Harrison says that “all of America” is excited to meet Juan Pablo. My Dad is American. I think Harrison has made some unfair assumptions about my Dad.

Next, we meet Juan Pablo. He talks about love so you know he’s serious. Juan Pablo sits on a bench and waves at boats. He takes his shirt off an does soccer exercises. Sports quota filled. I’m really getting to know Juan Pablo.

In broken English, he says he’s excited. Then, we show him lift tires and flex his arms because he wants to find a mother for his daughter. Please remember, the most important thing that could possibly happen this season is for Juan Pablo to find a proper mother for his daughter and the only possible way to do that is to grab 25 women with good agents who are interested in furthering their TV careers and date them all at once. It’s like a Disney movie.

Juan Pablo retired from professional soccer to take care of his daughter when she was born.  He shows us how much he loves her by picking her up in an SUV outfitted with cameras and drives her to a park.

When they get to the park, camera guys follow Camila around. We get to see her run and climb. It’s important.

Juan Pablo loves Camila. He says, “I love her, I don’t even know how much. Tons. There’s just no word for that.” Actually, Juan Pablo, the word for ‘tons’ is ‘tons’.

There’s 10 minutes of driving footage. The camera guy in the passenger seat keeps a camera trained on Camila and waits for her to talk or do something. It’s not the least bit creepy.

Next, we all drive to see Juan Pablo’s family. We’re there together, thanks to cameras. We should all get a bunch of cameras.

Luckily, the family is cooking Venezuelan food. I thought he was from Peru. Juan Pablo’s cousins talk about all of the women he has slept with. It’s a lot, what with the abs and all. People talk and there’s talking. It’s exJuasting. I’m running out of ‘Juan’ puns.

Juan Pablo’s cousin chimes in via television to tell everyone she’s pregnant. She talked to the family through a television projector. It’s like the future. Juan Pablo’s family is futuristic.

Juan Pablo’s dad gives him tips for dating 25 women at once. It really happens. He tells his son exactly how to date 25 women at once. They mention Camila and ABC breaks out the soft piano music, because it’s super touching how Juan Pablo exploits his daughter on TV. Juan Pablo cries. I cry. Everyone cries. 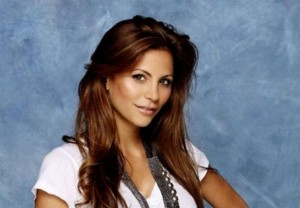 To keep the tears flowing, ABC gives us a tribute to Gia. She’s a model from the Jake Pavelka season. Gia committed suicide this past year. There’s slow motion footage of Gia walking. Then, Gia talks about love and friendship. Gia was sweet and beautiful. I thought she seemed nice.

Why does the woman on the Trellis Marketing commercial not look at the camera when she talks? Is that on purpose? (Buffalo only)

Next we preview the upcoming Juan Pablo season. Former Bachelor Sean gives Juan Pablo advice. Women act like idiots. People drink and have fun. Girls fight, because it’s the Bachelor. Every season we get a preview of an ambulance showing up at the mansion for a fake reason. There is no ambulance tease this season. What the hell? How can you have a Bachelor season without an ambulance? WHAT’S THE POINT? AND, WHERE ARE THE HELICOPTERS??!!!!!

When Juan Pablo talks, ABC shows us with his shirt off, running around and stretching. It really drives the points home.

We get some choice quotes from some of the girls coming up this season:

“It couldn’t feel any more amazing.”

“Just being here is more than I expected in my whole life.”

“I saw something in him that I knew that I could see for the rest of my life.”

“This is freaking awesome.”

“I just feel, like, a ton of different emotions right now.”

“No one has ever dealt with this before.”

Those are all real quotes.

Guys, at one point this season Juan Pablo gets up and doesn’t want to be interviewed any more. He says, “I don’t want to answer these questions.” It’s serious, you guys. Guys, I really think that Juan Pablo feels pain a lot deeper than the rest of us. You don’t even know.

So, that’s it. We’ll never get that hour of our life back. It’s gJuone forever. Be sure to return here tomorrow for the recap of the real first episode. Unless, you have eyes. If you have eyes, you should probably use them for something useful.