My Dead Mom Made Juan Pablo See Me 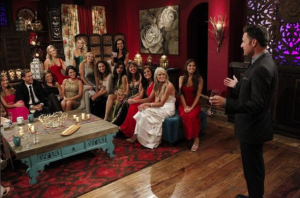 Hey, ABC. If you’re going to make us suffer through 2-hour episodes, at least find a guy with a 7-word vocabulary to provide content.

Juan Pablo needs a mother for his daughter Camila as well as an additional daughter and a son. His friends at ABC care very much for Juan Pablo so they scoured the globe for suitable wet mothers. Their search unearthed 25 babes. It’s an incredible coincidence that all of the women they picked are thin and attractive. It’s the Juorst show on television. It’s the Bachelor.

The newest meat bi-product for America to “fall in love with” is Latin sensation Juan Pablo. Chris Harrison calls tonight the exciting season premiere. This premiere followed last night’s premiere. I’m premiered-out.
We start off with footage of Juan Pablo getting shirtless pictures taken while he holds a rose, followed by shirtless running, shirtless volleyball and shirtless thinking. Hopefully, Juan Pablo doesn’t need to go into a convenience store. They require shirts.

We continue with stuff from last night’s hour-long worthless preview episode. Then, Juan Pablo Jualks around and waves at people at pets their dog.

He picks his daughter up from the airport. I guess his parents are going to babysit his daughter in an LA safe house or something while Juan Pablo sleeps around. It’s touching.

Juan Pablo says that he wants a mother and two more kids while ABC shows him running without a shirt some more. He keeps talking and running. I might have to mix chemicals under my kitchen sink and create a new alcohol to make it through this season. 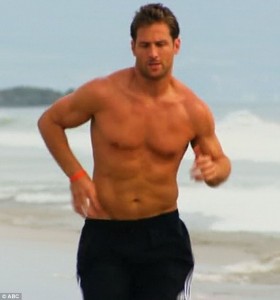 Juan Pablo pushes his daughter on a swing while cameras capture it all. Former Bachelor Sean Lowe walks up and it’s a huge surprise. Juan Pablo greets his surprise guest who is fully mic’d. Juan Pablo says that he called his friend Sean to have an important chat. ABC had nothing to do with Sean being here. It’s just two guys, fully mic’d up and properly lit, chatting about dating 25 women. Just an impromptu conversation, amazingly captured on tape for our benefit. It’s a wonderful time to be alive.

Sean gives Juan Pablo advice; have a strategy for kissing 25 women and never allow your 24 girlfriends to see you kiss the other girlfriend. Also, when you develop feelings for more than one of your girlfriends, listen to your gut. Sean also explains how his current marriage to Game Show winner Catherine is real because they rubbed their skunk-sprayed dog with tomato juice.

After the gripping man-to-man chat, Juan Pablo’s daughter helps him get dressed. They speak Spanish things. Juan Pablo’s parents tuck little Camila into bed while a camera man stands 3-feet away and films it. An additional camera man stands back a little further to capture the tender moment from a different angle. It’s Jueird.

We’re 20 minutes in and Chris Harrison makes his first appearance. What a slacker. Harrison says that, “Juan Pablo-fever has reached epidemic proportions.” The definition of “epidemic” is “the widespread occurrence of disease”, so I’m not arguing.

Next, we get to meet some of the women.

Chelsie- Science Educator- Says she’s silly. We get to see her play in a sun flower field so, yeah… super silly.

Renee – Paddle boards and roller blades. She’s like a Newport billboard, alive with pleasure. Renee also has an 8-year old boy. How does she find time to paddle board?

Amy – Massage therapist. Makes faces like she’s doing it while she rubs men and does the airplane thing with food while pretending to feed Juan Pablo. Seems normal.

Nikki – Nurse. Walks in a field while thinking. I know this because a camera captured her walking and thinking. Sometimes, she switches things up and walks in front of a fountain.

Lauren – Mineral Coordinator, whatever the hell that is. We met Lauren yesterday. I hated her immediately, which means she’s in a tie for first for my favorite contestant ever. Lauren got dumped by her fiancé about a year ago. She says that it’s something you never get over, which means she’s totally emotionally ready to date a guy dating 24 other women on National TV 12 months after getting dumped.

Clare – Hairstylist. She’s part Mexican. Her dad died. ABC stealthily captures her sitting on a bench thinking about her dad while looking at pictures of her dad. Clare tells America that her dad recorded a DVD before he died for her future husband to watch. That seems like a wrong thing to do. She’s holding the frickin’ DVD while she looks off into the distance and thinks! WHO WOULD GO ANYWHERE NEAR A WOMAN HOLDING ONTO HER DEAD DAD’S DVD? WHAT THE HELL IS THE MATTER WITH THIS SHOW? Sorry.

Next up is the barrage of limos. Juan Pablo stands in front of his mansion to greet his 25 girlfriends. Look at all of the words on this page. Holy cow!

Chris Harrison drops a bomb on us telling us that there will actually be 27 girlfriends and not 25. 27 girlfriends is unreasonable. Look, I can see a guy dating 25 girls, but not 27.

Limo arrivals are always tense for me. Many of the girls will do stupid things to be remembered. It always makes me cringe.

One of the contestants gives a little girl she’s never met a bracelet. The nurse contestant has Juan Pablo touch her boon with a stethoscope.

A girl names Danielle pulls off a good veteran tactic. She tells Juan Pablo that he needs to set aside time for her during the drunken cocktail hour. It’s smart. This way, you have an instant ‘in’ to smoothly use later. This is the most I’ve ever referenced strategy during my recaps. It’s also the last time I’ll ever reference strategy as I’m certain you have already skipped to the next paragraph or closed out this window all together. My pin number is 1717.

Another stupid gimmick girl does a dumb gimmick. Lauren S. plays a piano on wheels. We’re forced to watch a full minute of it.

Chelsie tells a terrible chemistry joke and I hope that they use slow motion cameras when something heavy falls on her.

Juan Pablo told ABC that he likes blondes because a lot of these women look exactly the same.

As we go to commercial, we’re led to believe that a pregnant woman is about to emerge from the limo and vie for Juan Pablo’s heart. Due to Aaron Mentkowski’s extended Channel 7 apocalypse report, we miss the hilarious punch line to the prank. The girl wasn’t really pregnant. It’s LOL. I commend Mr. Mentkowski on his excellent sense of timing. 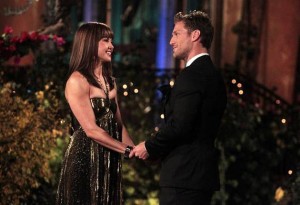 Amy, the crazy massage therapist has either killed or wounded several small animals. Someone gives him a fishing hook. One of the girls brings a dog. How many women are there? I can’t believe there’s still an hour and 10 minutes left! This show should be used to extract information from terrorists. It’s poison.

I’m not gonna lie, I fast-forwarded through three girls. I don’t care if they talked about hockey, I needed a break.

I stopped in time for the opera singer from Germany and Ottawa, somehow. If that woman sings, I’m gonna need drywall repair.

The limos are over and Chris Harrison lays down the rules. There’s a first-impression rose and a last impression grenade. There’s no grenade but, I’ve lost your attention and needed to get it back somehow.

The women scream when Juan Pablo walks back into the mansion. He gives a speech that no one understands but everyone laughs at. People start drinking. There’s dancing. They’re dancing for Camila, I think. At the same time this is happening, the College Football National Championship is happening on another channel. (Sports quota filled)

People talk and there’s talking. I’m running out of steam. There’s no way you read down this far.

Juan Pablo doesn’t talk much. He kind of just repeats the last thing someone just said to him. It appears as if looks might be all he has. I guess he’s a Juan-trick pony.

Things pick up as the crazy Amy girl rapes Juan Pablo on TV. It’s a combination rape/massage. She tells the camera that she’s ready to marry Juan Pablo after just one rape. That’s sudden.

We get standard sad girls who sit on the couch and pout about not being noticed. This leads to other girls talking about the pouty girls behind their back, which lays the groundwork for fights in later episodes. It’s science.

Some girl named Elise says that Juan Pablo looked at her a special way because her dead mother was helping her from beyond the grave through Juan Pablo’s eyes. Her dead mother somehow entered into Juan Pablo’s brain and made him notice her. This really happened.

I guess dead mothers are very supportive of their daughters in their quest to advance through levels of Reality TV dating shows. I know I have always held a grudge against my mother for being alive and never helping me gain Reality TV show success.

Our first breakdown occurs when one of the women can’t stop crying because she hasn’t had alone time to talk to Juan Pablo yet. She finally gets to talk to him and she freezes up. It’s awkJuard. Turns out, it’s the girl I hate, which doesn’t really narrow things down for you. Let’s move on.

Juan Pablo talks to the opera singer. He gives her the first impression rose, even though she doesn’t seem to want it. Opera tells the camera that she’s not feeling a spark. I don’t understand. I was specifically told that America has fallen in love with Juan Pablo. Is this woman not American? Show me the birth certificate! My early theory is that opera singer woman is the producer plant. She’ll be all sorts of terrible this season and the other girls will hate her for being here for the wrong reasons. It’s science.

Next we have the rose ceremony. Juan Pablo dumps some of his 27 girlfriends. He still has a bunch left, I think. Who cares.

Among the notables to be sent home are that one woman who cried and the one who had the thing. Crazy woodchuck eater Amy goes home. Crazy Amy tells the camera that she believes that Juan Pablo was going to be her husband.

When that’s over, they preview the upcoming season. There’s love and stuff.

It all happens so fast… and by ‘fast’ I mean ‘excruciatingly slow’. I’ve hated every season of the Bachelor. You know how a mother loves all of her children equally? Well, I’m that way with Bachelor seasons. I hate them all on a level that outsiders couldn’t possibly understand. I have a feeling deep in my heart that I’ll hate this season the most. It’s intuJuition.

Thanks for reading this. If you get a chance, please hurl a brick of plastic explosives at my satellite dish so I have an excuse to stop watching television.

If you missed last night’s recap, you can read it here.