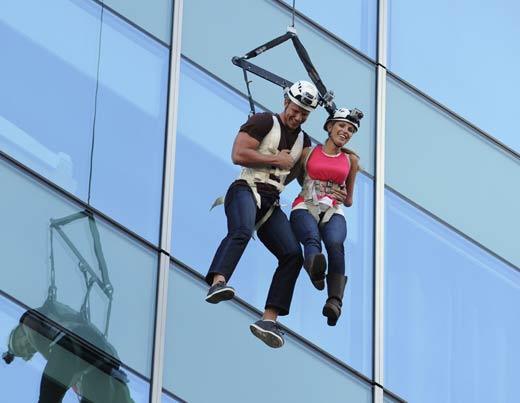 Hot Girl With One Arm Jumps Off Building

“Tonight is literally a tornado of negativity waiting to happen.”- Galileo

“Homegirl is a little excited to do a photo shoot.”- Emily Dickinson

“This is probably the biggest dream come true of my life, so far”- Winston Churchill

“My ability to love someone is not affected by how many hands I have.”- Albert Einstein

“I’m gonna get my country on”. John F. Kennedy

“It felt really good to go from ‘Friend-zone’ to ‘Girlfriend-zone’.”- Abraham Lincoln

“I was open. I was excited about love but… love was just not here… so…”- Martin Luther King Jr.

ABC is not above making a one-armed woman rappel down a building for ratings. I mean, Cmon! You knew, as soon as you saw a woman who had one arm, they were going to make her climb up or down a building or mountain. I had already opened a Microsoft Word document and started to pre-write this paragraph. Well, it happened. I’m jumping ahead but, I’m excited. It’s all in the recap of THE MOST DRAMATIC EPISODE OF THE BACHELOR EVER.

Giant religious Sean dumped 10 girlfriends last week and only has 15 girlfriends left. He dumps 3 more tonight which will leave him with only 12 girlfriends by the end of the week. Sean hardly has any girlfriends anymore. We open with Shawn doing leg lifts and then showering while he talks about finding a wife.

Chris Harrison comes in wearing a business casual table cloth and addresses the ladies. He sets the stage for a fun week. There will be two 1-on-1 dates and a group date. Some of the girls will not get dates.  They’ll only get 12 minutes with Sean instead of 4 hours. It’s emotional. Sean is looking for a wife so, it makes perfect sense that he would not date some of them or date 8 of them at once. It’s The Bachelor.

Sarah, the girl with one arm, gets the first 1-on-1 date. I wasn’t going to make her nub a big thing, but it’s all they talk about. I’m just recapping. Sarah is excited for the date. She says, “Just because I have one arm doesn’t mean we’re going to stop having fun.” It’s true, you know.

Shawn picks her up IN A HELICOPTER!!!!!!!!!!!!!! They’re still acting like helicopters are a big thing. People are so saturated with Bachelor helicopters, I could show up to work in one and it would only get a “Meh…”

ABC has a formula for falling in love which involves alcohol and heights. Sarah and Shawn land their helicopter on a building and are immediately geared up to rappel down the building at a million miles per hour. It’s not very efficient. The helicopter could have just landed on the ground instead of the building but, at least local helicopter rental businesses are making up some of the money they lost during the NHL lockout. (Sports quota filled)

They jump off the building and scream and cameras capture them screaming and it’s not very exciting for the viewer. I’m always on the side of true love so I’ll tolerate the building jump because it’s really the only way to tell if two people are compatible. When they land, ABC plays the same music used when Willy finally got free. Then, they open a bottle and starting drinking alcohol. “I’m starting to feel closer to her,” says Sean.

That night, they drink more and Sarah tells a story about not being able to zip-line because state laws prohibited it due to her only having one arm. Her Dad told her that she needed to find a guy who would be strong for her and it could be Sean.

My wife really likes Sarah because she’s cute. The date goes well. Sarah says, “The only thing in the world I thought I could be scared of, jumping off of a building, I did it today”. Sarah is a pretty brave girl. She’s not afraid of sharks, rape, bees, being alone, death, crowds, public speaking, clowns, being slowly murdered by a German guy with a knife who is saying something you don’t understand like in ‘Saving Private Ryan’ or haunted basements. She was only scared of jumping off of a building, and she did that today.

I’m far into this recap and I’m not done quoting Sarah because she’s a quote machine. She says, “I’m gonna start falling in love.” It’s week 2 and someone has already used ‘love’ in a sentence. The sentence doesn’t make a ton of sense, but she used ‘love’. I hope you guys are ready for how crazy and dramatic this Bachelor season is going to be. I don’t think you’re ready but, I can’t just wait around for you to catch up. Get it together. Everyone else is already reading the next paragraph. Keep up.

Sean says, “Sarah has blown away my expectations.” Does that means Shawn expected Sarah to spend the night in the bathroom crying? Maybe he thought she’d arrive for the date in fishing waders and spend the night with her head dunked in a Koi pond, catching fish with her teeth. How low were his expectations for her to have blown them away? Anyway, she did. You’re falling behind again.

Next comes the stupid group date. It’s stupid. Sean takes 40-or-so girls to a different mansion to go through a photo shoot. There are costumes and a lot of pictures are taken. Whichever girl takes the hottest picture with Sean gets a prize.

Tierra, the first-first impression rose girl, has been singled out for hate. Some of the girls spend time to hate her, so there’s hate. A girl named Leslie I do not remember kisses Sean and an atomic bomb of hate explodes over Bachelordome. My stupid computer doesn’t think ‘Bachelordome’ is a word. Kristy, the professional model, throws napalm on the ‘hate’ fire by being good at picture takin’ because she’s a professional model. So much ‘hate’ spread for the ‘hate’ sandwich. Kristy won the contest (there was a contest) for 3 book covers for some romance book that I couldn’t hear the title of despite rewinding the show 4 times.

Sean gets to know some of the girls for a couple of minutes so, he’s on pace to find a woman to spend the rest of his life with. There are a couple of hall of fame quotes:

“I’m a traditional Southern girl.”- Girl who is one of 15 girls dating one guy on National Television.

“I feel like tonight, Sean gets me.”- A different girl, who is one of 15 girls dating one guy on National Television.

After the super-fun photo shoot, the group gets together to drink. Some of Sean’s 15 girlfriends have a problem with some of Sean’s other girlfriends, for some reason. There’s a lot of drunken complaining. Each moment, Sean is closer to finding his wife.

A girl named Katie who is a Yoga instructor with super frizzy hair gets bored and leaves the show. She tells Sean she’s thinking about leaving. He puts up a fight by saying, “I’ll walk you out”. ABC doesn’t even bother with dramatic music.

Sean makes out with Leslie again. Kasey B. pulls Sean aside to make sure Sean loves her as much as she loves Sean. He does. He gives Kasey B. a rose 20 minutes after making out with Leslie. Leslie must feel good about their make out session.

The next 1-on-1 date goes to Desiree. They’re heading to a priceless art exhibit. Chris Harrison is super hilarious so he sets up a prank where Desiree breaks a million-dollar art thing. It’s just a prank, though, so don’t freak out.

Sean brings Desiree to an art room with art. Sean excuses himself and goes to a back room with Chris Harrison to watch Desiree on a secret camera. Desiree stands alone in a room and an expensive art thing falls over. Ed McMahon and Dick Clark come out to explain to Desiree that it’s just a prank. Desiree doesn’t freak out. She doesn’t even seem bothered. She laughs. It’s weird and awkward, but more awkward for the television show that is out of ideas.

After the prank, Shawn and Desiree go to his place to sit on a couch and drink. They talk about their parents. Then, they cut to Desiree in a bikini. It’s hot tub time… in week 2. This season of the Bachelor is not messing around. They talk about love while the hot tub filter gurgles at a deafening level. Sean says, “You’ve seen 100% of me” and “You have every quality I’m looking for”. They’ve known each other for 6 hours. Thank you for reading this far down. Sean gives Desiree a rose. She accepts it. They make out in a hot tub with a couple of camera guys… and, eventually, America watching. (Except me. I look away out of respect)

The Cocktail party is next. Sean makes a promise to spend some time with the women he’s neglected this episode. He tells the camera that he already knows the 2 girls that he’s dumping. Lindsay/LinDsee/ Lynn-Z, the girl who wore a wedding dress the first night, sits down with Shawn and blows him away. They have a ton in common, he learns from their 80-second conversation.

The rest of the girls sit on couches and talk. What’s a Cosmetics Consultant? Some girl named Amanda doesn’t talk with the rest of the girls. She sits in complete silence. She comes across as stabby. I don’t recognize her. I feel like they just sneak new characters in and out of the show. I’m supposed to joke during these recaps but I’m afraid of Amanda. I’ve never seen a girl sit there and not talk before. Cue the ambulance.

Some Arabic girl tries to teach Sean Arabic. She teaches him one sentence. He learns it immediately because Sean is the best. She blabs to the camera how deep their connection is. I hate this show.

Sean takes Amanda, the girl who doesn’t talk, to one of the couches to talk. She actually talks. I see no knives.

The Rose Ceremony is tense. I just don’t want anyone to go home. Sean hands out roses. Chris Harrison comes out to tell everyone there’s one final rose remaining and it’s so serious and profound that I cry a single tear. Amanda the psycho gets the final rose and my wife and I punch each other in the arm and throw popcorn around.

The highlights of the upcoming episode show that someone will soon be in a neck brace and an ambulance will finally arrive at the mansion.

While the credits roll, a bunch of drunk girls discuss Greek Mythology and try to think of what ‘Atlantis’ is called. I did not make that up.

Greg Bauch is the author of ‘Frank Dates’ which seriously only costs 3 dollars for your iPad.