If you’re new to the Bachelor, ‘feeling a connection’ is the most important thing a human can do. 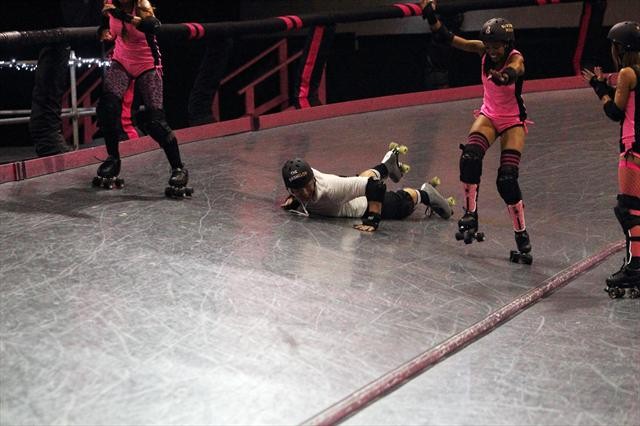 You Can’t Love If You Can’t Roller Derby

We’re 48 weeks into the newest season of the Bachelor. It’s actually only 4, but it feels like much more than that. I know these people better than I know my own family. I’m starting to build a connection with some of the girls.

Sean Lowe moved one step closer to true ‘televised’ love last week. He dumped 3 of his 16 girlfriends so, now he only has 13 girlfriends. He’s almost in a normal ‘televised’ relationship. There will be a pair of 1-on-1 dates and a group date. The previews are telling us that one of the girls is going to get injured this week. Another ambulance visit could be on the way. This show is brutal. The Bills put fewer people on injured reserve than the Bachelor. (Sports quota filled, like, 8 sentences in. It’s a new record.)

Sean contemplates love while getting ready to brush his teeth. He says, “My goal last week was to make the girls feel comfortable with me.” So, he dated 16 of them. Sean also goes into his closet with his shirt off. Luckily, cameras were there. Sean doesn’t do any sit-ups this week, so there’s a chance his muscles will atrophy.

Leslie H. wants a 1-on-1 date and cries about it… a lot. She’s really crying, “I just want Sean to see that I do have a heart”. She should totally get an x-ray of her heart and then hand it to him in some sort of creepy ‘real-live-beating-heart’ scrapbook.

Despite crying, Leslie H. does not get the first date. Selma gets the first 1-on-1 date. We’re far enough into the season that I should know who Selma is but I do not. The date card tells Selma that they’re going somewhere hot. I say a little prayer that they’re rappelling into a volcano.

Sean takes her for a jeep ride. Heavy guitar rock plays Selma and Sean through their jeep ride. “I’m an outdoorsy guy,” Sean says. Outdoorsy guys pee off boats and sneak moths into their friends’ beer cans. They don’t use words like ‘outdoorsy’. By the way, computer, ‘outdoorsy’ is a word? Seriously? I hate this computer.

They drive the jeep to a plane. “It’s beyond everything I’ve ever imagined. I feel like a princess in a castle.” Selma says while wearing yoga pants on the plane.

The plane flies them to a desert. Selma is not impressed with the desert. She says “He took the Iraqi to a desert?” Bachelor producers have outdone themselves. One-armed girls rappelling buildings. Iraqis in the desert. Next season, I hope the Bachelor is a Grizzly bear and one of the contestants is a salmon.

When they land, they go rock climbing. Sean says, “I know rock-climbing is out of her comfort zone…” and keeps talking. Selma doesn’t like heat or heights. Bachelor producers read these facts on her eHarmony-type ‘Bachelor’ compatibility test and decided, “We need to put her in a desert and have her climb a mountain so Sean can find love!”

I did a Google search of ‘Desert’ to make sure I wasn’t confusing it with ‘Dessert’. Google asked if I was searching for ‘Desert Deli’, which means there is a business out there somewhere that provides meats and cheeses in the middle of a barren, arid land.

The mountain climb is super dramatic because Selma dug deep after being inspired by Sean. When they’re done climbing a mountain, they stand on top of the mountain and Sean hugs Selma in a way that makes her boobs protrude. It’s a nice moment for me.

We come back from commercial with a ‘Moon’ shot. (Fist pump!) They wind down with a private pool party in an RV museum or something. Really, please just skip to the next paragraph. Sean wants to kiss Selma. Selma tells the camera that she can’t kiss Sean because her Mom is watching and will totally freak out. Selma spills the beans on her strict culture and you can see Sean’s eyes glaze over as he begins to cross Selma off of his ‘Fantasy Suite’ list. No abs, no rose. That’s the Bachelor code. Sean says he respects it but he’s also dating a dozen other women. He gives Selma a rose because he basically had to. They lie down together and talk in growly, quiet voices. It’s super adorable. ABC knows that some people can’t understand adorable, growly, quiet talk so they provide subtitles for the important parts.

The group date is next. The girls speculate as to what they are doing. “I think we’re getting into those giant Hamster ball things and rolling down a hill”, says Lindsay/Linsey/LinZ. She’s close. It’s a Roller Derby arena. ABC is making a one-armed girl and others Roller Derby. I suppose, it is better than volleyball. Tierra, this year’s villain, tells the camera that she’s going to hurt someone. The Bachelor ambulance warms up in the parking lot.

The girls prep for Roller Derby and fall all over the place. One-armed Sarah cries because she’s afraid she’ll get hurt. They keep showing her fall. Bachelor producers can be heard off-camera, whistling and looking away. Sean tells her that she doesn’t need to Roller Derby. Sarah bucks up and Roller Derbies. (Derby’s? Derbies? Who cares? It’s not even a verb.)

One of the girls says, “I hope I don’t die”. Amanda falls and smacks her chin on the floor. Once again, these idiot Bachelor camera guys, who never miss a single frame of shirtless Sean, can never seem to capture these hoochies injuring themselves. (Update: 8 or so years of recapping this show and my computer still doesn’t think that ‘hoochie’ is a word)

Amanda gets checked out by doctors and goes to the hospital. Sean steps in and cancels Roller Derby. They do an all-skate instead. Somewhere, off-camera, a Bachelor producer breaks a clipboard in half over his knee. America watches a bunch of adults skate.

After that stupid date, the girls get dolled up to go drink on a roof. I have “drink on a roof” saved on my desktop so I can just copy and paste it each week instead of re-typing it. Tierra complains about the fact that she’s on a group date and her eyebrow goes up three floors. You can judge her intensity by how high her eyebrow goes up when she talks. She’s straight-up crazy.

Sean pulls Sarah aside to tell her how proud he is that she has one arm. The rest of the girls sit on couches to allow Tierra time to throw out evil looks set to evil music. Amanda comes back from the hospital to tell Sean how much her mouth hurts. She’s wearing jams.

Tierra and the rest of the girls go back to hating each other. A fight breaks out over nothing.  Tierra threatens to leave because she’s not getting the attention she desperately craves. Tierra jumps up and leaves saying, “I can’t take the fakeness from any of these girls anymore”.  She is one of the fakest girls on the planet.

While Tierra is crying and leaving, Sean is on his way to a hot tub with one of the other girls. Tierra basically ruins hot tub time so, now she’s on my list. You don’t interrupt ‘hot tub’ time. That’s unacceptable. I pay my taxes. I pray to God. I work hard all day and, when I come home, I want my ‘hot tub’ time!

Sean talks Tierra out of leaving even though she was never close to leaving her blooming ‘attention’ garden. Tierra gets her attention and successfully ruins ‘hot tub’ time. She’s the devil. I can see why the other girls hate her. Sean gives her a rose. The rest of the girls start carving their toothbrushes into shivs. The rest of the night goes on without incident, or ‘hot tub’ time and I’m angry.

Professional crier, Leslie H., gets the other 1-on-1 date. She also gets a pair of diamond earrings so the other girls want her face to be dragged across a barbed wire fence. She’s asked if she likes her earrings and she says, “Holy Moly, do I like them!” As they’re speeding away in a sports car, Leslie says, “Holy Moly, Batman!” This is my first taste of Leslie H. and, I must say, I didn’t realize she was such a tremendous spaz.

Leslie says, “Sean has taken control and made me feel more like a woman than I’ve ever felt before”. Yes, because Sean bought all of this crap and set up the shutting down of Rodeo Drive. Sean really did take charge.

After we are forced to watch shopping, Sean and Leslie go to a museum or something to eat on television. Leslie says, “Holy Moly” for the third time. They get to know each other while America watches.

Leslie reluctantly talks about her past relationship and laughs like Lewis from ‘Revenge of the Nerds’. Around the 3,000th time she laughs, Sean tells the camera that he’s not feeling a connection. If you’re new to the Bachelor, ‘feeling a connection’ is the most important thing a human can do. No connection, no rose. Leslie is toast. The music changes from ‘fun’ to ‘tragic’. Before she’s able to finish her champagne, Sean dumps her. He picks up the rose first like he’s about to give it to her. Leslie’s face is heartbreaking. She felt a connection. She’s not laughing anymore, which is good for the rest of us.

Sean walks her to the Bachelor minivan. Leslie, a true trooper, warns Sean about bad girls in the house, hinting that Tierra the ‘hot tub’ time destroyer may be bad news. Sean goes back into the restaurant/museum place where there was supposed to be a romantic private concert by ‘Taylor’ or something. ABC already paid ‘Taylor’ to play music so Sean just hangs out and thinks by a railing while these two guys play music to an empty room. Watching it is the most fun I’ve ever had.

Sean is sad. He is beginning to doubt the process. He drops the rose off the railing and BACHELOR CAMERAS CAPTURE IT FALLING! Sure, guys. If a person falls 30 feet, you’re off eating sandwiches, but Sean drops a rose and you get 4 different angles! I’m betting they did several takes of the rose drop. Some poor intern had to stand in the rose landing circle for 40 minutes while they lit it.

The rest of the girls sit on couches to hate Tierra. Tierra confronts Robyn on being mean to her. Tierra says that she’s never not liked her. I can’t believe you’ve read down this far. The music gets pretty dramatic. I turn down the T.V. so my neighbors don’t call the cops. Tierra tries to be friends and then tells the camera that she’s lying. She’s a liar. She lies.

Catherine and Sean walk away to make out. It’s awkward. She tells Sean that she has a crush on him. She doesn’t say ‘connection’. I doubt Sean even understood what she meant. What the hell is a crush? Who knows?

The rose ceremony is next. Amanda gets dumped. She has an incredible ability to often look horrible. Sean walks her out. She says, “I feel really rejected”. Rejection will do that. Amanda says, “It’s not fair”. To recap, a woman who wanted to be on television and live in a mansion with the other girlfriends of the total stranger she is dating just called that process “not fair”. Sean only has 11 girlfriends left. One of them he can’t kiss. One of them is a liar who lies. One of them has one arm. One of them is black.

There are two episodes next week on Monday and Tuesday and I hate this country.

Greg Bauch is the author of ‘Frank Dates’.