Hey, this is nice. I’m going to ruin it. 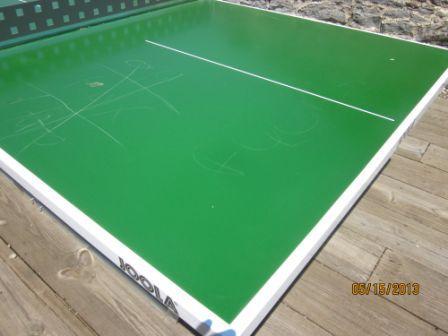 This Is Why We Can’t Have Nice Things, Buffalo

Once upon a time, you couldn’t even play ping pong at Canalside.

Now you can, but your experience will be marred by the etchings of the lowest ranking members of our society– vandals.

The ping pong table, put in place for public use just a week ago, now features new “artwork”– a game of tic-tac-toe and curse word beginning with the letter F.

Is vandalism the most heinous offense that one can commit? No. But in a world where we throw around the term “senseless crime,” I defy you to name one less justifiable.

I won’t quite recommend the death penalty for the perpetrator(s) but I could be convinced. As a society, we have no use (and should therefore have no tolerance) for the type of person who looks at something and says “Hey, this is nice. People of the community can enjoy it. I’m going to ruin it.”

Looking for a suspect? Just a hunch– start with the guys who were going after Lindy Ruff’s kid on Twitter when the Sabres were struggling. It might not be them, but they’re cut from the same worthless cloth.