There’s a right way and a wrong way. 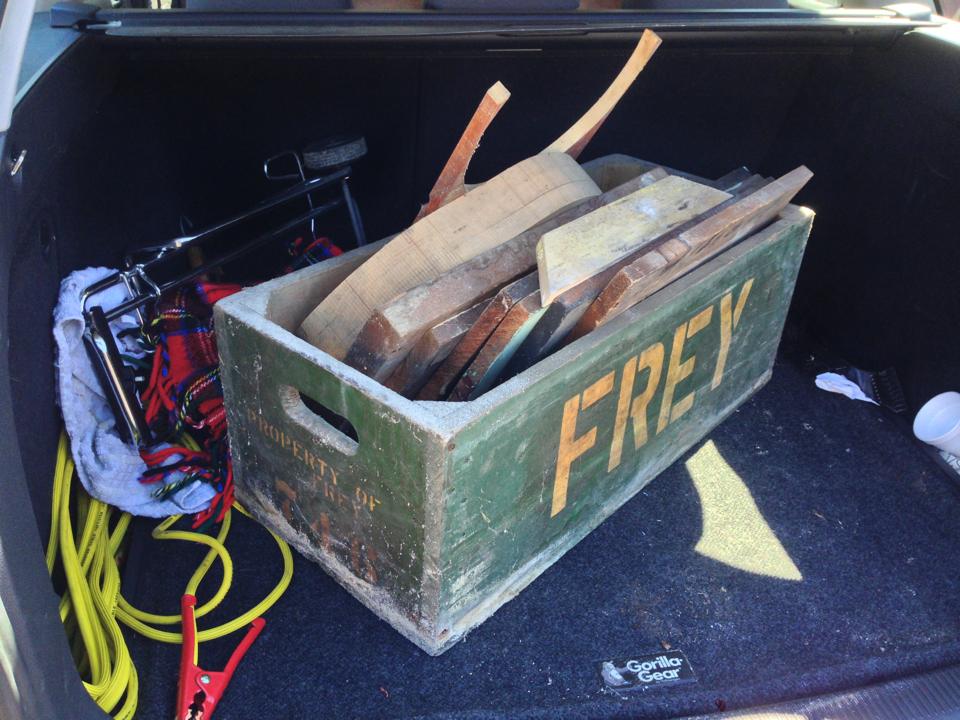 The Art of Garbage Picking

This weekend, walking the dog, I found the best piece of “trash” I’d seen in a while.

This landfill bound wooden box, filled with woodworking scraps, was once used by Rudolph Frey Meats to deliver sausages and other meat products to small grocery corner stores, butchers, and places like the Broadway and Washington/Chippewa Markets all over the city. 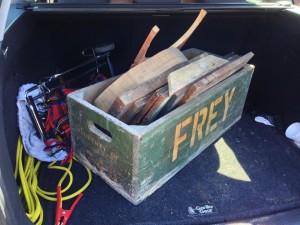 Treasure in the trunk of my car.

At one point in my life, for fear that someone else find my treasure, I probably would have grabbed this 50 pound box, and tried to carry it while managing my erratic and mentally unstable dog for the rest of the way around the block.

Instead, at peace with the fact that someone else might snatch up and enjoy this vestige of long ago East Buffalo, I took the dog home and got the car. It was still there, and I loaded up the box (which I wanted) along with the wood scraps inside (which I didn’t want but will explain in a moment.)

It had been quite some time since I grabbed something out of someone’s pile of trash at the curb. These days, people bring me their junk. I don’t even have to ask, let alone pick. Occasionally, I’ll see something destined for a landfill and I’ll ask to give it a home, but straight up garbage picking I haven’t done for a while.

It’s not because I’m above it, it’s just that my tastes have refined. I have eleventy-twenty-two tables that just need a little… or chairs which will be great with a new… I don’t need more of those sorts of things, and that’s generally what’s in the garbage. Broken stuff.

When we first bought our house 13 years ago, the first big trash day doubled the volume of furniture in our big city house. It was the only way we could do it. Some of those items, carefully spruced up, remain a part of our home today. Most, however, were eventually put back to the curb. A few times, I even helped someone load the thing I was throwing out into their car as they plucked it from the spot next to my big blue tote. The circle of life.

As a garbage picker who lives on a busy street, I am careful to properly display (and even put a “TAKE ME” sign on) stuff I consider to be “good garbage.” Not in good enough shape to head to AmVets or St. Vincent dePaul, but still good enough for someone to get some use out of it. As I said, if I see the actual picking, I’ll even help load it in the car, and give the provenance of the piece to the new owner.

One time a guy was so happy to find this bike that he could fix up for his daughter, I went to the garage and got all the bike parts I could find to help him make his daughter’s day. Garbage picking builds communities.

But there’s a right way and a wrong way to garbage pick.

My Frey’s box was being chucked, in some part, because it was the vessel holding those wood scraps at the curb, part of this man’s effort to neatly pile a bunch of junk from the basement on the curb. To just dump the wood in a pile on this guy’s lawn would have obviously (I hope) been rude, and there was no other clean way to leave ’em, so the whole thing went in my trunk. Since it was big garbage day anyway, I bundled up the wood and put it neatly at my own curb.

For as happy as I am when a guy who needs a grill thinks he can get a year or two out of the one I’m throwing out, I’m just as angry at the junk dealers and metal scrappers, who’ll turn a neat pile of refuse into an ugly mountain of detritus and debris, hop in their Fred Sanford-looking pick up and leave without conscience.

After about 8 years of renovations on my home, my basement was filled with scraps and bits of all sorts of home improvement ephemera, small pieces of wood molding, PVC drain, electrical wiring, copper pipe, window glass, fiberglass insulation, etc, etc. I put 8 years of this stuff into about 2 dozen contractor bags, very lightly filled for ease of carrying. By the time I saw him, some low-life had taken an razor blade and slit about 15 of the bags, pulling out no more than 8 cents worth of metal, but leaving saw dust and little bits of broken glass all over my lawn and side walk. 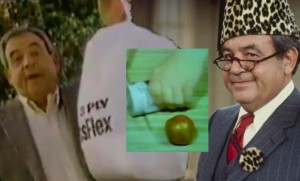 While Mr. Cunningham’s 80’s commercial advice echoed in my mind, it was rather difficult to “not get mad,” because I had, indeed, “gotten Glad.” It was like some sort of epic battle between Tom Bosley and the Ginsu guy in my front yard, and Howard’s fez wound up looking like that beer can.

I hate the shame attached to garbage picking, but jackwagons like this razorblade loser give people pause when they see someone trolling their trash. So by all means, reduce, reuse, recycle. But be respectful. Pick politely. Don’t make a mess.

Buffalo Journalist and Historian Steve Cichon brings us along as he rambles about nonsense twice a week on Trending Buffalo.

When he’s not fighting the urge to yell “Get off my lawn!”, Steve looks for Buffalo’s good stories and creative ways to tell them as the President and founder of Buffalo Stories LLC. He’d love to help your business tell its story. For a decade, he’s also collected and shared Buffalo’s pop culture history at staffannouncer.com.