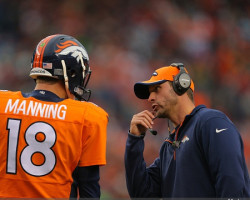 I sent some questions to Twitter buddy Jacob Dearlove, a writer for SB Nation’s Denver Broncos blog, Mile High Report about Broncos offensive coordinator Adam Gase. Over the past year or so, I’ve found Jake to be one of the most knowledgeable Broncos follows out there.

The Bills have reportedly requested to interview Gase soon.

Note: Jake’s from Canada, so I felt it was only right to leave “offence and defence”  Too awesome to change.

1. To the best of your knowledge, explain Adam Gase’s general offensive philosophy and/or scheme? Has he shown a willingness to adapt to the talent provided to him at key positions?

Dearlove: It’s hard to get a solid read on Gase’s own personal offensive philosophy or scheme. In Denver, the Broncos are running a similar offence to the Tom Moore-Peyton Manning offence that was so successful in Manning’s time in Indianapolis. That being said, Gase has made some tweaks to that offence with the Erhardt-Perkins background that he has from working under Josh McDaniels during his time in Denver, adding in bunch formations and some different looks than the offence had in Indy.

The offence is primarily dependent on execution of a small number of core plays, combined with an ability to adapt these plays to the looks that opposing defences give. Because of Manning’s collaboration with Gase since his inception as offensive coordinator, it is hard to get an exact read on Gase’s own personal philosophy.

The best example of Gase adapting to talent at key positions is the integral role that he played in the mid-season innovations that were installed by the Broncos when Tim Tebow took over as a starter. Adam played a key role in designing the read-option offence that the Broncos ran with Tebow and which essentially paved the way for subsequent NFL read-option style offences.Another successful adaptation to talent can be seen with the 2014 Broncos.

At the beginning of the season the Broncos rode the arm of Peyton Manning and an aggressive passing game that achieved success with very little help on the ground. Recognizing a flaw in the offensive line, Gase moved multiple offensive lineman around, which has created a more balanced offence in Denver, often relying on the success of the run game to win games down the stretch.

With this switch, Gase showed that he is not necessarily dependent on Manning’s success to win football games, but that he can create successful schemes and game-plans with the talent that he’s provided with.

2. Obviously, Gase is in a fantastic position as Peyton Manning’s offensive coordinator, so it’s easy for some to assume he’s just riding Peyton’s coattails. What about his coaching makes him a good head coach candidate? What are some potential negatives?

Dearlove: Gase is not a coach who achieved even minor success playing football; instead, he’s a person who loves the schematic side of the game and has dedicated himself to learning football as a coach.

One of the things that is talked the most often about the Broncos OC is that he is incredibly smart, but also that he is one of the hardest working coaches in football; Manning has said himself that Gase is the smartest football guy he knows and that he has learned as much from Gase as the coach has from him.

One potential negative to Gase is that he has not spent much time on the defensive side of the ball, outside of his time as a graduate assistant with LSU. This is somewhat irrelevant though, considering Gase’s grasp of the game, his dedication to detail, and his ability to learn quickly. A second potential negative is simply the fact that he has never spent time as a head coach anywhere. Since the beginning of his quick rise to coaching stardom, Adam has never been a head coach on any of the teams he’s been involved with.

3. Was there ever fan or media gripes about Gase not getting the most out of the offensive talent on the Broncos roster?

Dearlove: There have been few gripes about Adam Gase getting the most out of his offensive personnel, although there have been many fans and media who call into question the play-calling in Denver.

This flack often gets directed at John Fox, who has been said to be far too conservative when Denver gets a lead, allowing other teams to claw back into games. It’s hard to say who is the orchestrator behind the more conservative play calling late in games, be it Fox, Gase, or even Peyton Manning on the field, but the fans have coined the conservative approach “Foxball” since the trend has been noticed before Gase’s time as OC, when Mike McCoy was in charge of the offence.

As far as certain players not being taken advantage of, it’s hard to say that has happened during Gase’s tenure; in fact, maximizing the potential of his skilled players is one thing that he has been praised for. The Broncos’ OC has gotten the most out of newcomer Emmanuel Sanders, who is having a career year in his first season outside of Pittsburgh, and he brought forth a fantastic 2013 season from Knowshon Moreno, who was previously coined as an underachiever after being drafted high in Denver.

4. Who do you think Gase’s biggest coaching influences have been? Have his offences had a good run-pass balance?

Dearlove: Gase’s biggest coaching influence is likely Nick Saban, who he learned under in Michigan State and LSU as a graduate assistant. Saban gave Gase a heavy workload during this time, under which the young assistant thrived.

When Saban, who is often attributed as one of the best college football coaches of this generation, moved from Michigan State to Louisiana State, Gase was the only assistant that Saban brought with him.

Other coaches who have influenced Gase are Mike Martz, who Gase was an offensive assistant under in Detroit, and Josh McDaniels, under whom Gase was the WR coach in Denver.As far as a balance, the Broncos offences have been more pass-oriented, running 57% pass plays in 2014, just down from 58% in 2013.

Despite this slight favouritism of passing plays, both facets of the offence have achieved success. In 2013 and 2014, the passing game was ranked 1st and 3rd respectively in DVOA on Football Outsiders, while the running offence was ranked 10th and 7th respectively. Hard to argue with the balance of a top ten offence in both the passing and running game during Gase’s two seasons as offensive coordinator.

As an aside, during 2012, when Gase was the QB coach and did not necessarily have much of a say in the running game, the Broncos were still ranked 2nd in passing offence, yet their rushing offence finished just 15th in the NFL.

5. The Bills are, essentially, a semi-competent QB away from being a scary playoff team, and EJ Manuel’s still on the roster. Do you think Gase has the knowledge to be a good teacher of the quarterback position / help Manuel’s development?

Dearlove: It’s a tough question to answer, but I think that Gase would be up to the job of developing EJ Manuel. In his short career, Gase has coached two veteran starting QBs, Peyton Manning and Jon Kitna, neither of whom required much development at the time of his arrival.

As I mentioned before, though, Gase was integral in the offensive innovations that allowed Tim Tebow to be successful in Denver. Manuel, like Tebow, is not gifted with a fantastically accurate arm, but he is mobile and has plenty of arm strength. If Gase was able to play a key part in Tebow’s success in Denver, there’s little doubt that he could aid Manuel in becoming a contributing offensive member in Buffalo.

Another positive sign for those interested in seeing Manuel succeed in Buffalo is Gase’s work with Broncos backup Brock Osweiler. While the jury is still out on Osweiler’s ability to play at the NFL level, John Elway and John Fox have both spoke highly of the young quarterback, and both have spoke to the development that they’ve seen in his game since he was drafted in 2011.

As you said, the quarterback position is one of the few question marks in Buffalo, which makes Gase a top candidate for the job, considering his extensive work with quarterbacks. Many have said that Peyton Manning has experienced a sort of late-career revival in Denver, producing more than he ever has, and Gase has undoubtedly been a contributing factor.

As mentioned above, Manning has spoken outwardly of learning from Gase; if one of the greatest quarterbacks of all time can learn from him, it’s hard to believe that Gase could not aid significantly in the development of EJ Manuel.