If you like #SabreSim2012, please follow presenting sponsor Oogie Games! Follow @OogieGames (BUFFALO, NY) While Friday night fireworks in downtown Buffalo are typically a summer treat a few blocks up… 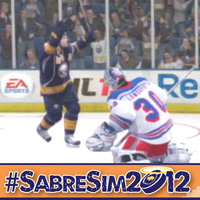 While Friday night fireworks in downtown Buffalo are typically a summer treat a few blocks up Washington Street, the Sabres 3-2 overtime victory over the New York Rangers had First Niagara Center aglow in autumn.  Christian Ehrhoff scored the game winner as Buffalo improved to 2-1-0.

Former Sabre Taylor Pyatt took a centering pass from Mats Zuccarello and flipped a backhander past Ryan Miller to open scoring for the Rangers at 8:18 of the first.

Buffalo drew even on a strong solo effort by Ville Leino just past the midway point of the second.  On the power play, Leino hustled after a Drew Stafford dump-in, beating Rangers defenseman Dan Girardi to the puck and then outworking him to get to the slot.  Leino’s quick wrister beat Henrik Lundqvist to the stick side, squeezing just inside the post.

The Sabres took a 2-1 lead when Ehrhoff’s point shot yielded a juicy rebound and Thomas Vanek was there to clean up the mess.  The goal came at 13:18 of the second period and marked Vanek’s first tally of the young season.

Carl Hagelin’s goal to even things up for the Rangers at 4:45 of the third was one for the highlight reel, though the Sabres might want to forget about it entirely.  After taking the puck at his own blue line, Hagelin maintained possession long enough to carry the puck deep along the right wall, retreat to the blue line, accelerate back down low, move around to the front of the net, get off a shot, and then tuck away his own rebound.

Buffalo wasted a tremendous opportunity to end things in regulation, coming up empty on a power play that began with less than three minutes left on the clock.

When Ryan Callahan granted the Sabres another power play opportunity by checking Robyn Regehr from behind, this time in overtime, Buffalo would finish things off.  Cody Hogdson won the draw in the Buffalo end and sent Jason Pominville in on the rush.  His shot was blocked but sat on the ice nicely for trailer Ehrhoff, who buried it for the power play goal and the win with just 1:28 left.

The Sabres hit the road for a matchup tomorrow night with the New York Islanders.