There are a few lines you’ll need to commit to memory if you want to be a fully-functioning member of society. 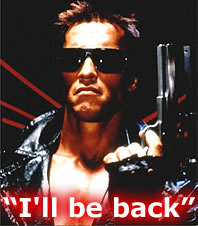 Learn These Movie Quotes Or Look Like A Fool

I don’t like to hang out with “movie quote guy.” Most of us don’t. But there are a few lines you’ll need to commit to memory if you want to be a fully-functioning member of society.

See, some of these quotes are so ingrained in our culture that they’re frequently dropped into casual conversation, sans reference, and might not mean what they sound like they mean.

Was it over when the Germans bombed Pearl Harbor? Here’s how the Bills make the playoffs. shar.es/6Zn6d

Today, this is a tongue-in-cheek rallying cry used in a desperate, last ditch effort to boost the morale of a dispirited group of people. The implication is that “although the odds are REALLY not in our favor and we’re probably not going to be able to dig out of this hole we’re in, we might as well keep trying since we’re not officially dead yet.”

The context is implied (the boys from Delta House were ultimately expelled from Faber) and if you’re not familiar with the quote, you’re left in the dust.

If you’re left in the dust yet still quick to point out the “mistakes” of others, well, you wind up looking like this.

Surely, both Kevin and Connor were trying to help us out. They weren’t trying to show off or say “ha ha, I’m smarter than you.” Connor even demonstrated exceptional humility with his intentional use of “Japenese” as if to say “hey guys, we all make mistakes. Look, even as I’m correcting your error, I’ll make one myself to highlight one of my own imperfections.” We appreciate it.

That said, nobody wants to be Kevin or Connor in this story.  In an effort to avoid such a fate, there are two choices:

B) learn the context of a few oft-cited movie quotes

We have no control over A but can help with B.

TODAY’S MEANING: I’m talking right now and nobody seems to be paying attention to me. Is anyone hearing what I’m saying? Is it pointless to continue speaking? Should I just stop?

“We’re not in Kansas anymore.”

TODAY’S MEANING: It’s time to adjust our way of thinking and operating because we are no longer in the safe and comfortable environment to which we have grown accustomed.

TODAY’S MEANING: I’m going to state this as calmly as possible but, dude, you are really up against it right now and if something doesn’t drastically change, you’re screwed because you are on the wrong side of a horrible mismatch.

The aforementioned surely form just the tip of the iceberg. (Titanic, 1997.)