There is a crane assembling a crane to take down a crane right now outside of the FNC. #lotsofcranes — KRK (@kevinrkennedy) June 19, 2014 Progress. Such a curious thing…. 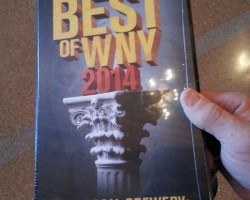 There is a crane assembling a crane to take down a crane right now outside of the FNC. #lotsofcranes

Progress. Such a curious thing.

Smart Thing One: University Heights Opens Up Its Toolbox

“The Tool Library” is open for business. Located at 5 W. Northrup Place, the non-profit program is open to all residents of Buffalo and its surrounding suburbs. Need to borrow a tool to finish a project? This is your destination. A year’s membership is just ten bucks, and grants access to over 500 tools.

Check it out, and then check out some tools. It sure beats paying full price at a big box store for something you might only use once.

You can find the Tool Library through the link above, on Facebook, and also on Twitter at @TheToolLibrary.

Was @communitybeer named the Best Local Brewery in #Buffalo by the readers and staff of @BuffaloSpree? Yup! Thanks! pic.twitter.com/1fuYFtjSDD

“The founders of CBW all have roots in Buffalo and we want our brewery to be an integral part of our city and the neighborhood our brewery is located in. We are donating our spent grain to the Massachusetts Avenue Project, disposing of it in an ecologically friendly, mutually beneficial manner, and are planning similar partnerships with other community organizations in the city. Our goal is to foster a sense of community and place, enriching our hometown through the production of damn good beer.”

And it’s the most refreshing goal ever. You can find CBW on Facebook, here.

This year’s NHL draft is, for now, the biggest draft Sabres fans will witness in their lifetime. Bottoming out next year might provide for a bigger experience. It’s a huge deal, this rebuild thing, and there’s an incredible amount of prospects and information to amuse and confuse us. Kris Baker of SabresProspects.com has been putting out a phenomenal pre-draft prospect review each year. It’s long. It’s informative. It’s entertaining. It’s terrific.

@SabresProspects I feel like I owe you money after reading this. — Scott Michalak (@ScottyMCSS) June 16, 2014

A rebuild is hard, but that doesn’t mean it doesn’t have its fun parts.

One of my favorite summer #Buffalo things is back. pic.twitter.com/9glomv5301

Our friends at @Mes_Que confirm they’ll have a 10×15 foot screen outside for this Sunday’s US match as part of Soccer Day in #Buffalo — FC Buffalo (@FCBuffalo) June 18, 2014

That last one is a pretty big deal.

Solar panels. Who would’ve guessed Buffalo would have a gigantic solar panel factory?

Progress. Such a curious thing.