It’s Groundhog Day, which is fitting because recapping ‘The Bachelor’ for 12 years will make you feel like you’re living in an unending, unchanging hell for eternity. Chris Soules is… 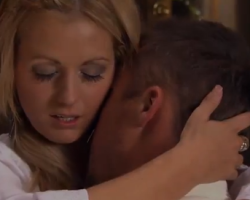 It’s Groundhog Day, which is fitting because recapping ‘The Bachelor’ for 12 years will make you feel like you’re living in an unending, unchanging hell for eternity. Chris Soules is still looking for love and he’s dumped a bunch of girlfriends in an attempt to have just one girlfriend for awhile. It’s a bold strategy. Let’s see if it pays off.

The announcer guy starts by telling us that the show is about to explode. If only. The preview footage promises hot air balloons, real feelings, use of the word “connecting”, dramatic music, tears, threats, and Bachelor paramedics! Dig in, y’all!

The girls are told they’re going to Santa Fe and act like they’re going somewhere exciting. They all tell the camera that they are all falling for Chris the Farmer. We watch it.

Carly gets the first one-on-one date. The date card says, “Let’s come together.” They must be going to a Beatles concert. Are they still together?

Some kind of meditation woman named Tziporah is camped out in a New Mexican villa. She helps Chris the Farmer and Carly get in touch with their spiritual side. We could all stand to get more in touch with our spiritual side, you guys.
Spirit woman burns sage and does spirit things like chanting. They all breathe. We watch people breathe. It happens for about 3 minutes. Spirit woman wears big feather earrings and all I can think about is how much those would make my shoulders itch.

Carly blindfolds Chris the Farmer and feeds him fruit. I miss the breathing part. The blindfold isn’t even really covering his eyes. Carly touches Chris the Farmer and smells him. She awkwardly feeds him a strawberry and it gets all over his face. I am 100% confident that no one is reading this sentence. There’s no way you got past the breathing part. I’m so sure no one is reading this that I feel safe posting my pin number. It’s is 3242.

Instead of taking their pants off, Spirit woman makes them talk instead. They talk and there’s talking. It’s about love and vulnerability. I hate this show. 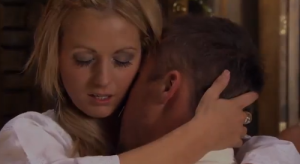 Hold your face close to this picture and breathe on it

Back at the mansion, Kelsey tells everyone the story of her husband dying from congestive heart failure. The rest of the girls don’t believe that she’s sincere about having a dead husband. This show… seriously. Kelsey wants to have a one-on-one date to tell Chris the Farmer that she’s a widow. She doesn’t get a one-on-one date, so she’s going to compensate by acting crazy. I’m excited.

Back to Carly’s one-on-one date. Keep up! Carly and Chris the Farmer eat on a couch or something. Bachelor interns have lit 30,000 candles and a roaring fire to set the mood. It looks like the room is on fire. Carly talks about her last relationship in which her boyfriend didn’t want to touch her. She should have sent her boyfriend to the Spirit woman. They could have breathed on each other.

Carly talks about being insecure and ugly. Chris the Farmer nods a bunch. He’s wearing a jacket in a room with 30,001 fires burning. There’s no way he doesn’t have pit stains. The couch they’re sitting on has about a dozen pillows. Chris the Farmer talks about his farming job and how he’s not good enough. This entire date has been the most uncomfortable thing ever. It’s like jamming pink insulation fiber in my eyes and ears. Chris the Farmer gives Carly a rose and they make out. We watch it.

The group date is next. Nine women join Chris Soules for river rafting. There is absolutely no way you can know for sure if a woman is right for you unless you take her river rafting with eight other women.

Megan is worried about alligators. Some River Ranger guy drops by to tell all of the girls that there’s a good chance they’ll die while river rafting. Fingers crossed. 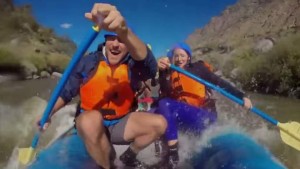 A lot of people died during this.

Next, we get a bunch of rafting footage. There’s paddling and rapids and screaming, in that order. Sports quota filled. The girls get wet. Keep up! Jade falls out of the raft and dies. Wait, she lives. She survived. They brought her back into the raft while blacking out her crotch. Twelve years of women jumping into rafts and down buildings but they’ve never blacked out crotches until this season. Why are blacked-out crotches “in” this year? Why don’t you guys ever answer my questions?

After rafting, the group gathers at a place with couches, candles and alcohol. They’re always going to places like this.

Before Chris the Farmer can meet his girlfriends at the couch place, Jordan walks in and stops him. Jordan was dumped in week 2. She drove all the way from Colorado to Santa Fe because she doesn’t think she gave the process a shot. She’s looking for a second chance. She drank a bunch and acted goofy. I remember liking her, but I always like the drunk ones.

Chris the Farmer considers giving Jordan a second chance. It’s considery. They chat. We watch it. It happens. Chris the Farmer walks Jordan into the couch place and presents her to the rest of his girlfriends. His other girlfriends act happy to see Jordan. They all get points for that.

Ashley I. doesn’t like Jordan. She says that Jordan isn’t a lady. Ashley I. should know what a real lady is. Real ladies are virgins who suck the faces off of farmers in tents. Ashley I. tells Chris the Farmer how much different Jordan is. She tells Chris the Farmer that Jordan is here for the wrong reasons. Boom. You don’t do that. You don’t tell the Bachelor who is here for what reasons. That’s a great way to get dumped, based on past wrong-reasonedness conversations on the show.

Chris the Farmer takes all of his girlfriends aside and asks them each what they think of the fact that he brought in another girlfriend for them to compete with. Could you even imagine this world? The girls all take it well, but state their displeasure. It’s displeasurey.

With Chris the Farmer in the other room, the girls discuss the strategy of admitting that they want Jordan to leave. Whitney doesn’t want to kick Jordan to the curb because she’s a good person who doesn’t like bad people. Whitney is a lot like Abraham Lincoln. I’ve always thought that. Jade recovers from her poor circulation problems to tell Chris the Farmer that she’s not comfortable with Jordan’s return. Jade is a hero.

Back at the mansion, Britt waits for her one-on-one date card with Carly. Carly is super happy for Britt to take her boyfriend out for a date. It’s endearing. The date card mentions that “the sky’s the limit” and Britt freaks out because she’s afraid of the sky and heights. Britt cries. You guys cried too, admit it.

I love these producers:

“So, what is your biggest fear? Heights? Great, here’s a date on top of the Space Needle!”

Back to the group date. Keep up! Chris the Farmer can tell that his nine girlfriends are upset about the extra girlfriend. He brings the 10th girlfriend, Jordan, aside to dump her again. He dumps her. It’s not like she drove from Colorado or anything. Jordan thanks Chris the Farmer for dumping her and talks about how much integrity he showed in dumping her a second time. That really happened.

After she thanks Chris the Farmer for dumping her, she goes out to say goodbye to the rest of the girlfriends. They all smile and hug Jordan seconds after saying bad things about her. It’s back-stabby. The girls are happy that it’s back down to nine girls. Ten girls is just too many girls for one date. Nine girls is the perfect date. Megan cries about Jordan getting dumped, or something. What am I doing with my life?

Chris the Farmer gives Whitney the group date rose because she’s a nice person. See, you guys?!!! Being a nice person is a good thing! Be good people, jerks!

Britt’s one-on-one date is next. I’m super nervous because Britt is afraid of the sky and there’s going to be sky stuff. Chris the Farmer arrives early and surprises Britt in bed while she’s sleeping. He brings a couple of cameras. It’s rapey and creepy. It’s a super big surprise. Good thing Britt wore makeup to bed. On a side note, Britt sleeps in a bed with Carly. It’s not weird that the farmer’s girlfriends all sleep in the same bed together.

After ballooning, Chris the Farmer and Britt go back to his place. Back at the mansion, the other girlfriends discuss how Britt never showers. She didn’t shower for her big date and now she’s in his rumpus room. If rumpus happens, she’ll be unclean. That’s not very biblical. What would Claire’s dad say? Answer me!

Britt and Chris the Farmer talk about how many kids they each want. It’s the kind of thing you need to talk about after a hot air balloon date, especially if you’re unclean. Chris the Farmer gives Britt a rose and they make out. They make out a lot. It’s slurptastic. It’s not at all weird watching them make out in a bed. It’s probably not weird at all for the three separate camera guys camped out in the room filming all of this.

I would really like to not watch this show anymore.

Kelsey is ready to be annoying. She steals time with Chris the Farmer by sneaking off into his hotel room. She tells Chris the Farmer about her marriage that ended in death. It’s one of two ways that a marriage can end. As Kelsey tells the story of her husband collapsing and dying, Chris the Farmer nods a bunch. It’s noddy.

Kelsey is glad that she has this death story to share. She tells the camera how amazing her story is. She’s a bit of a psychopath. Moments after hearing the story of a man collapsing from heart failure, Chris the Farmer makes out with Kelsey. He’s such a gentleman!

Kelsey tells the camera about how this show is her love story. She makes Ashley S. seem put together and normal. Nothing is weird. Remind me never to go to Santa Fe.

The cocktail party is next. Keep up! The previews have been telling us that stuff is about to get super crazy. It’s going to be so crazy, you guys. I can’t even. You guys can’t even either, admit it.

Chris the Farmer manages to pull it together. He’s like Lou Gehrig.

Ashley I. is sad about the cancellation and cries, a lot. Kelsey starts to cry. Kelsey outcries Ashley I. It’s an old fashioned Hubba Bubba cry-off!!!!

Kelsey goes berserk. She has a panic attack. Bachelor EMTs run on the scene to tend to Kelsey’s stupid panic attack. The Bachelor EMTs can’t handle the situation, so they call 911. This show is the worst thing ever. Just as it can’t get any worse, it does. The show ends with a ‘To Be Continued’.

Now, we have to wait until next week to find out if Kelsey dies, or something. The preview of next week shows more crying. So, we have that to look forward to.

For more on this crap, please listen to ‘We Bros Accept this Rose’, my podcast with Shaun Murphy. Shaun and I sit really close to each other and breathe!