Just like a reoccurring eczema rash, ‘The Bachelor’ is back for another season. Chris Harrison and the fun bunch at ABC have chosen Chris Soules the Farmer to be this… 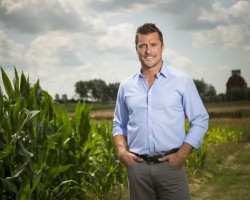 Bachelor Recap – Chris the Farmer Meets his Crop of Women

Just like a reoccurring eczema rash, ‘The Bachelor’ is back for another season. Chris Harrison and the fun bunch at ABC have chosen Chris Soules the Farmer to be this year’s meat market special. He’s from Iowa, so… corn. Chris the Farmer is super dreamy and ‘Ah shucks’ nice. Twenty five women will line up to convince themselves that they’re in love with him.

Two announcements before you read further:

On to the recap.

We see footage of Iowa and Chris the Farmer farming in Iowa. We literally watch crops grow. He also eats one of his crops to test it. While he’s farming, Chris the Farmer finds time to stand in a field and stare off into the distance to think about how much he’d like to find love.

Chris the Farmer says, “Iowa is God’s country”… So, God loves to be bored. So far, this is my favorite episode ever.

Chris has a beer with other farmers, works out next to a big red barn and sits on a motorcycle to think about love while staring off into the distance. Amazingly, cameras are there to capture this.

Chris Harrison gives us live updates from a random red carpet while a bunch of cat owners scream in the background. While he’s screaming over their screaming, a little clock appears in the top of my screen to tell me the actual show doesn’t begin for an hour. The first hour of the show is just preview garbage. I wish so badly that there would be a natural gas explosion in my basement so I had an excuse not to watch this.

The preview hour entails interviews with former Bachelor contestants. We get the all important opinions of the attention-starved elite. ‘Bachelor in Paradise’ success story Marcus and Lacy talk about their upcoming wedding. Lacy, a Rocket Scientist, says that they’re 80/40 decided on their wedding date. She’s fun.

ABC gives us video montage teasers of the girls vying for Chris the famer’s love. This year’s crop of contestants seems like a good one. (Get it? Crop????!!!! I hate you guys). We have a news producer with big arms, a virgin and other women.

Chris Harrison interviews Nikki, the winner of the Juan Pablo season, for twenty minutes. ‘Winner’ is a loose term. Nikki was jilted by Juan Pablo. Her love was betrayed. There was betrayal. It was betrayaly. The interview, like everything else that has happened for the first hour of the show, was a complete waste of time. That’s the kind of thing you need to expect when watching ‘The Bachelor’, so I really can’t complain.

Next, Chris the farmer walks around his farm, showers outside (true story) and stands around to think about love. He’s magically transformed to Los Angeles so we can watch him get dressed, talk about finding a wife and shower outside again. While that’s a full day for any man, Chris the farmer still has time to stand on a balcony to think about love. Those farmers sure have quite the work ethic.

The actual show begins with the arrival of the limos containing attractive and misguided contestants.

The first girl out is Britt. She hugs Chris the farmer for a full minute. It’s both awkward and annoying. She gives Chris the farmer a hand-written coupon for a ‘free hug’. Those are often hard to redeem. A woman named Whitney arrives and sounds like a chipmunk on helium. Do you capitalize periodic table elements? I feel like, if she sounded like Carbon, I would have capitalized ‘Carbon’. But helium is a low-class element that people blow into balloons. I’m keeping it lower case. Did you read down this far?

A woman who works at an organ donor place brings Chris the farmer a fake heart in a cooler. It’s pretty cliché. I mean, I don’t know about you guys, but I am so sick of women arriving to date a guy who is dating 24 other women toting a cooler full of a fake heart covered in fake blood.

A girl comes dressed in jorts and the other girls hate her. That seems fair. She changes clothes, so relax.

A classy lass named Kaitlyn tells Chris that he can plow the bleep out of her field any day. That’s what Tramp said to Lady after passing her the meatball with his nose. Chris Harrison tells Chris the farmer to go inside and have a good time.

In a huge shakeup of biblical proportions, ABC moved early and Chris the farmer will mingle with only half of his harem. The first thing he does is tell Kaitlyn to shut up so he can make a speech. I like Chris the farmer already.

Next, they all drink. Keep up.

Britt tells Chris the farmer to feel safe with her. She gives out coupons for free hugs. It’s a good thing she’s a woman because, if she were a guy, giving coupons for hugs and telling people to feel safe with you means you’re a child molester. Chris likes Britt. They almost made out. Almost, you guys. Almost.

The girls mention that Amanda has big eyes, so ABC spends the next several minutes zooming in on her eyes as she annoys America with her vibrant demeanor.

ABC brings us back to their live studio audience to make sure we’re not having too much fun. Chris Harrison talks to Claire while Claire’s dad watches. Claire talks. We’re forced to listen. Why do they drag these has-beens along for their crappy television shows? Don’t these people have jobs? Is it Claire’s job to sit in a studio audience and answer two questions a year about a limo? If so, what does that pay? How come you guys never answer my questions?

More limos bring more women. It’s like ‘The Great Gatsby’, I think. I’m not sure. Because more women are being added to the mix, ABC plays music that would fit well with Civil War footage. We can’t be sure, because there isn’t a lot of Civil War footage available. I think the South burned it all before they lost to the British. Why do you read these?

The girls inside gawk at the girls outside. There is judgment. It’s judgmenty. One of the girls rides in on a motorcycle instead of the traditional limo. This show has no rules. Can you ride a motorcycle in an evening gown? Isn’t there a danger of the gown getting sucked up into the…motorcycle… parts? I’m not sure how motorcycles work. Nicole comes out of the limo wearing a pig nose. Inside the mansion, Ashley L. says, “I’m not even sure that Chris has pigs on his farm, so she should have done her homework.” It’s a profound statement.

The WWE wrestler named Britney wears the clothing equivalent of a band-aid. Carly carries a portable karaoke machine and sings. I look around, but can’t find an ice pick to jam into my temple.

Chris the farmer heads back inside to talk to the rest of his women. In all, he has 29 girlfriends. That’s a lot of girlfriends. He dances with Kaitlyn, the potty mouth. We get to watch some white break dancing. It takes more years off of my life than the singing.

Ashley S., who I predicted had murderous tendencies when I first saw her, talks to the camera about how people are like onions and you get to know their layers by cutting them open. It’s fun. I’m having fun, you guys. Ashley S. is either really drunk, or she’s storing woodchucks in a freezer.

Tara, the clothes changer, gets really drunk and burps a ton. She’s hot. I likes’em with impaired judgement!

While he’s handing out roses, drunk Tara leans over and causes a ruckus because she’s drunk. In a huge upset, she doesn’t throw up. I’m so angry. Nothing ever works out for me.

22 women remain. That’s a lot. I can’t wait to follow along with the tears, drama, fighting, tears, love, rose-giving, tears, ambulance visits, helicopter rides, tears and crying. The favorites out of the box have to be Britt, Jade and Tracy. I say that only because my wife likes them and she’s always right about these things, and everything else. Crazy Ashley S. the onion murderer got a rose because the producers made Chris the farmer give her a rose. You can’t convince me otherwise!

Oh, yeah, a girl named Britney got kicked off but refused to leave. Keep up!

Don’t forget, Shaun Murphy and I have a podcast, ‘We Two Bros Accept this Rose’. Listen to it for fun. You will also have a chance to compete in the Trending Buffalo Bachelor Fantasy League. You can draft your team beginning Wednesday. Keep up!