You get the feeling that Sean loves love. 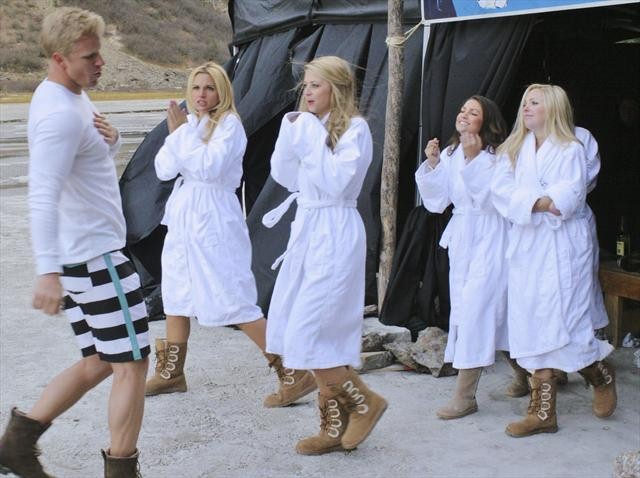 Sure, you watched a tree kill someone but I once lived in a tent!

This recap started with me just banging on the keyboard but I went back and deleted that paragraph. It’s Day 2 of back-to-back Bachelors. That smell in the air is excitement… and drama… and some silicone… and connections, tons of connections… and roses, some helicopter fumes, Chris Harrison’s pants, and my stomach bile.

“There’s a woman tonight that I do not see a ‘forever’ with.”- Sean Lowe, setting the tempo for tonight’s episode.

Sean and his 9 one-and-only’s are in the Canadian Rockies. Sean is upset right off the bat because it’s cold in Canada and he can’t take his shirt off to do sit-ups, chin-ups, and ab-ups. He is wearing a coat as he stares out at mountains to contemplate love but, it’s just not the same. How can you think with a shirt on? Don’t shirt fibers cloud judgment? Answer me!

The theme of last night’s show, ‘Hate Tierra’ continues. All of the girls hate Tierra, but love the rest of Sean’s girlfriends for some reason. They find out Catherine gets the first 1-on-1 date and they all coo and cheer like their baby sister has found her Prince Charming. SHE’S DATING YOUR FREAKING BOYFRIEND, YOU BRAINLESS TWIT! This show is such an explosion of stupidity.

Their date is very cold and windy, but these two kids don’t care. They sled and laugh and you just don’t even know how much fun they have. ABC pressed play on some ‘fun’ guitar tracks. There’s hugging. Holy cow!

“I always have fun with Sean. I never get cold with him”, says Catherine, a woman who has never had a 1-on-1 date with Sean and has never been in a cold place with him before this date. She also says that she can’t imagine not falling in love with Sean, which is a double negative, so, who knows what she meant.

When they’re done with all of that fun and… let me reiterate, it was six buckets of fun… Sean takes Catherine for a horse carriage ride. They go to an Ice Castle. I keep watching because the Sabres are down 2 goals. They cuddle on an ice couch, in front of a fire. Because no one on a reality television show has gone 12 minutes without a traumatic experience, Catherine tells Sean about the time a tree fell on her friend. Catherine says that this made her want to get married. I’m not making that up.

Sean digs girls who watched trees fall on people. He gives Catherine a rose. Then, they make out. I cross my fingers that they really get into it and slide down on the couch and one of their tongues gets stuck to their ice couch but it doesn’t happen. Just once, I want a Bachelor contestant’s tongue to get stuck to a couch. This was my best chance and it didn’t happen. It’ll never happen.

The group date is next. There is more canoeing… seriously. I watched, like, 27 minutes of canoeing last night. They couldn’t rent snow mobiles? Answer me!

Leslie gets to canoe with Sean and the rest of the girls are angry. Selma wants a shark to eat Leslie. Luckily for Leslie, sharks aren’t abundant in Canadian lakes. The canoeing lasts hours. There is so much canoeing and it isn’t fun.

Once the canoes are docked, I say a little prayer as thanks that everyone made it through the canoeing safe. ABC didn’t have enough fun making a one-armed girl canoe, so they pressure a bunch of models to jump into the freezing cold lake. Lake experts tell everyone the water is 33 degrees. Sean and the girls take their clothes off. One of the girls has a tattoo on her foot and that seems painful.

Selma doesn’t do it. She says that she comes from Baghdad and doesn’t do cold. When Sean brought Selma to the desert, she complained that she didn’t like the heat. Selma is just like Goldilocks.

They jump in the water. Sean finally gets to take his shirt off. Next, there is 7 minutes of screaming. It’s just girls in bikinis, cold water and shrill screaming. Now, my dog hates the Bachelor. I give him a treat. There’s more screaming. Anyone outside of my house would think that I was murdering a slumber party.

Dramatic music plays us through the polar plunge and all of the girls talk about how much fun they’ve had. It did look like fun. I love screaming. The fun stops when it’s discovered that Tierra can’t breathe. Tierra got too cold. Paramedics wrap her up in the same foil that the First Niagara Center uses for Hot Dogs.

It’s intense. Tierra has blue lips, but not fun blue lips. Because Tierra is an over dramatic actor brought on the show to make the rest of the girls angry, you can guess what the next half-hour of television is. It’s Tierra acting like she’s about to die because she got cold while Sean fawns over her. The rest of the girls sit on couches to complain about Tierra overreacting. They call her a ‘Tierrorist’ which is way funnier than ‘Tierrable’. I lol.

Paramedics give Tierra an oxygen tank which doesn’t make a ton of sense.

The group date cocktail party comes next. Sean takes his girlfriends to a lodge with couches and alcohol. Sean makes out with Leslie. She tells Sean that she loves love. You get the feeling that Sean loves love too.

Sarah with one arm pulls Sean aside to show him pictures of her when she was 4. It’s slightly less sexy than scissoring his crotch and jamming your tongue down his throat. Most of America, and some of Canada, can clearly see that Sarah is not going to be around much longer.

The next day, Sean makes a visit to the girls lodge to dump Sarah personally. He shows up, unannounced and pulls Sarah aside by the arm. She seems concerned but Sean says, “No, you’re not in trouble”. Then, he dumps her. It’s awkward. They hug and, once again, Sean does a fantastic job of not looking down at the nub. Sarah starts to cry. Sean gets up and says, “So… I know you wanna say goodbye to the other girls, and I don’t want to talk to you anymore so… look at the time!”

Sarah thanks Sean for dumping her. Since Sarah was dumped early, she has extra time to cry to the camera and tell the world that she wants to fall in love. Sarah seems really nice. The rest of the girls hug her because they feel bad that their boyfriend dumped her.

Sarah thinks she always gets dumped because she’s different. I feel bad until I remember 15 seconds ago when she said she fell in love with a guy who was dating 8 other women.

Desiree gets the next 1-on-1 date. Sean takes her to Banff Park. They walk there even though there are dozens of helicopters in Canada. I’ll bet it’s because Canadians care more about the environment. They rappel down a mountain to a nice picnic lunch. Sean, because he’s contractually obligated to do so, compares mountain climbing to falling in love.

I’d like to be frozen, just so I can be sure that, 4,000 years from now, Bachelor producers are still making their viewers watch hours of mountain climbing every season. Does the creator of the Bachelor have a mountain climbing fetish? Who climbs mountains?

Desiree is excited but afraid to climb the mountain. She says, “I am just beyond speechless” and I suddenly miss the 7 minutes of screaming. They climb down the mountain. Desiree whines a lot. We watch it. It happens.

When the most exhilarating 6 minutes of television history are over, Sean takes Desiree to the picnic. They make out. Sean climbs a tree. Desiree climbs the tree. Sean and Desiree yell out, “Hello Canada!”, and that was probably awesome for Canada to have heard that.

Sean takes Desiree to a teepee. It happens fast. Try to keep up.

Things get serious in the teepee. Desiree tells Sean that she used to live in a tent. What? She didn’t have anyone die in front of her? What a pathetic story.

They sit on a couch. Sean stole my Aunt Gert’s sweater for their date. Sean and Dez (She’s Dez, now. Keep up!) cuddle and make out. Dez must be extra comfortable because she’s so used to making out in tents. Sean gives Dez a rose. She accepts it despite his sweater.

Dez says, “I opened up about spending part of my life in a tent and, here I am, falling in love in a teepee”. She really says that.

The cocktail party is next. Sean isn’t sure which of his 8 girlfriends he’s dumping so it’s a super serious cocktail party. Selma feels the heat. She didn’t do the polar plunge so she decides to make up for that by kissing Sean. It’s a big deal because her family’s culture forbids public displays of affection. Apparently, her family has no problem with Selma constantly showing 67% of her boobs to America… and parts of Canada. Selma gives Sean a kiss and shames her mother. I’m sure her Mom had an idea by now that Selma wasn’t a snowflake.

When he’s done kissing Selma, he full-on makes out with Leslie or Ashley… no! Lindsay! He makes out with Lindsay. And, when he’s done with that, he blindfolds AshLee and makes out with her. I swear. The music ABC chooses for Sean’s third make out session with a third woman in 4 minutes of television is a bit too much. Why does this network continue to veil their smut with sincerity? He’s making out with girls like he’s at nickel beer night at BJ’s in Fredonia. He didn’t climb up AshLee’s hair to rescue her from a tower. It’s not a fairytale. It’s an STD festival. I’ve witnessed more romance in line for rides at the Fair.

Anyway, the rose ceremony is next. Sean has to dump two girls. He’s conflicted because there will be less women to swallow. The girls all hope the Tierrorist is sent home, but ABC has other plans. Desiree and Selma get Das boot.

Sean has a tough time dumping two of his girlfriends, especially with the connections he was feeling and everything. He says, “That was really hard for me because I had feelings for those two women, but I knew that you six were the ones for me.” He really says that.

Selma takes the news well for a woman who just disgraced her family for no reason. I’m guessing Sean dumped her because she refused to take part in the polar plunge. I can’t blame him. Could you imagine this scenario in real life? You take a girl to the movies, things go well, and then, she doesn’t jump into a partially frozen lake? Of course you would dump her. I make it a point to throw partially frozen water at women immediately to gauge their character.

Daniella and her crooked mouth cry more. It turns out that Daniella actually came on the show to find love and NOT just to be on T.V. so I feel really stupid for having made fun of her. Daniella had her heart broken. She can’t even believe that ‘What’s his name’ did that.

If it’s okay with you guys, I’m not going to recap the Bachelor for the rest of the week. I need a few days off from this garbage. Next week, Sean takes his girlfriends to a tropical island so they can jump off of yachts into the ocean.

While the credits are rolling, Sean tells a story about peeing in a desk.

Greg Bauch once wrote a blog about Applebees.