Please note: We have added fun to the Bachelorette season. I have created a custom Bachelorette Fantasy League to bring even more enjoyment to Andi’s journey to find her true… 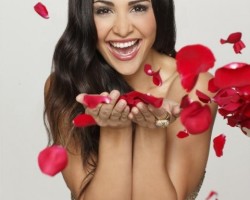 Please note: We have added fun to the Bachelorette season. I have created a custom Bachelorette Fantasy League to bring even more enjoyment to Andi’s journey to find her true 6-month relationship. It’s super easy for you and a miserable pain in the neck for me. Just click to pick your three contestants here. I’ll do the scoring based on my fantabulous Bachelorette scoring system and we’ll update the standings here on TB each week.

If you don’t do this, you’ll never forgive yourself. Every time a helicopter flies overhead, you’ll think, “That could have been 10 points for me.” We’ll award prizes to the winners. It’s more American than scratch off lottery tickets and hats with foam boobs on the brim. Enjoy!

On to the recap… 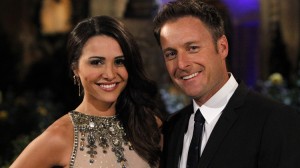 They’re smiling because they hate my happiness.

Welcome back, sinners. America’s third favorite contestant from last season’s ‘The Bachelor’ is looking for love in all of the wrong places. Those places are ‘ABC’ and ‘hot tubs’. Andi Dorfman triumphantly marched away from Juan Pablo and captured a portion of our hearts. Essokay, she’s now the Bachelorette and gets to choose a lover from a sultry group of 25 ab-ridden males. There will be tears, making out, and pants. Lots and lots of pants. Please stop reading these recaps.

We begin our season the way we begin every season… with Chris Harrison paying homage to the guy who died. Apparently, one of the contestants, Eric, died while para sailing. It happened after he was already eliminated. As we know from ‘The Bachelor’ franchise, the only true way to find love is by doing something dangerous. I hope Eric found love before entering that final Rose Ceremony in the sky. Chris Harrison dedicated the season to Eric. So, this is season ‘Eric’.

Andi walks onto the scene to begin season ‘Eric’. She declares that she’s a prosecutor who puts bad guys away. That escalates into “fighting crime”. Now, Andi is a crime fighter. Cameras capture her packing up her stuff to leave her job to find love. She goes to a park to sit on a bench for two seconds. Then, she gets up and moves to a different park of the park to think. Keep up!

Andi leaves the park and all of that craziness to consult with her parents about making out with guys on TV. They’re supportive. Andi tells her parents, “Next time you see me, there will be two guys.” I’m sure her father is super happy to hear that.

On the prospect on love, Andi says, “I don’t need it, but I want it enough to go get it.” I’m that way with ice cream.

Next, Andi puts on clothes. Keep up! She walks on the beach to think in different clothes. THERE ARE SO MANY CLOTHES. She’s wearing clothes.

Andi’s sister joins her in her Bachelorette suite to talk about this fun experience she’s about to have. They discuss kissing guys. Then, they look at dresses. The Rangers and Canadiens are playing Game 2 of the Eastern Conference finals on a different channel. Sports quota filled, so is my sadness bucket.

Andi talks about finding love for seven solid minutes. She’s wearing different clothes. Each individual outfit has been dedicated to Eric. Chris Harrison welcomes her to the mansion and the guy limos arrive. I’m nervous, you guys. Are you nervous? I’m nervous.

During the break, we see a promo for a show called ‘Selfie’. We’ll know for sure I’m in hell if I’m somehow roped into recapping that as well.

The limos arrive. Holy smokes, I’m still nervous. Guys come out and make small talk with Andi Dorfman. A guy with a bowtie says that he’s “giddy” to meet her. I wouldn’t recommend drafting bowtie guy. A guy named Tasos is a wedding event coordinator. My wife says, “No chance”.

Because Bachelorette producers hate me, one of the contestants pushes his limo up the driveway. His name is Cody. Cody spray tans his face and pushes limos up hills. I’d date him.

Because ABC is out of ideas, they cast an opera singer named Bradley. He comes across as the kind of guy who stands at the end of the bed to watch people sleep. Not any particular people, just people. A guy named Mike tells Andi that people call him ‘Camps’. If people called me ‘Camps’, I’d find new people.

Eric comes out next. Eric eventually gets dumped and dies. His profession is listed as ‘Explorer’. I thought we already found everything! Are there still places to be explored? Does ‘Exploring’ pay well? Do Explorers get dental? Do they plant flags in stuff? Answer me!

Once we’ve met all 25 guys and have had the proper amount of time to fall in love with each of them, everyone heads inside of the mansion to drink and embarrass themselves. Andi addresses the crowd and says, “Literally, my heart is pounding right now.” She literally used ‘literally’ correctly.

Markel makes cookies and gives Andi cookies. He wasn’t carrying cookies when he walked in. Did he run into the mansion and start baking? Did ABC let him store his cookies in the mansion? That would be unfair. That would be like letting a horse wear a nose strip. Boom. Sports quota killed. Markel gives Andi a black and white cookie because he’s black and she’s white. It’s a metaphor, you guys.

Eric the dead explorer tells Andi that he likes to do dangerous things. She doesn’t tell him to stop doing dangerous things, so she is practically responsible for his death.

ABC loves to be stupid so they bring a guy named Chris back on the show for a fake moment. If you’re new to the show, Chris is a former contestant who has a bad temper. ABC plays up this fake angle by having security hold him at bay while he demands to meet Andi. A Bachelorette producer tells angry Chris that he’ll talk to Chris Harrison. Yes, because Chris Harrison is the Bachelorette Czar who can allow men with tempers to crash their carefully orchestrated Reality show.

Back in the mansion, Andi and Tasos talk about travel. Andi says that, if she could go anywhere, she’d go on an African safari. Tasos agrees and they hi-five. If you’re new to dating, hi-fiving a girl is a sure-fire way to get directly into their pants. No woman can control herself once she is hi-fived. I’m having trouble even typing from the heat produced by the hi-five.

Meanwhile, in the parlor, two of the guys really hit if off because they’re both into Formula One racing. They laugh and move closer to sit next to each other. I’m pretty sure it’s the closest this show has ever come to true love.

Chris Harrison pulls Andi aside to tell her about angry Chris the party crasher. He doesn’t warn her about his angriness. They’re all acting like this mansion is a house on Elmwood that you can just walk up to and knock on the door. Andi refuses to see Angry Chris because it wouldn’t be fair to her 25 boyfriends.

When Chris Harrison breaks the news to angry Chris that he can’t come on the game show, he gets upset and refuses to leave. Harrison is all, “you have to leave” and angry Chris is all, “Well, I’m not leaving!” Then, they go to commercial. So, that’s settled.

We’re back from commercial. Keep up! ABC has added another Bachelorette security guard to stand next to angry Chris so you know it’s serious. Angry Chris agrees to leave, but does so angrily. If this wasn’t completely fabricated, I’d be worried that angry Chris went off to kill some people. 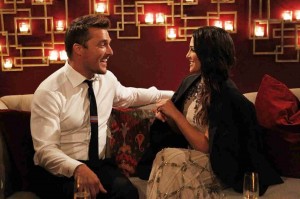 If it wasn’t for guys like this, we wouldn’t lose an hour of sleep in the spring.

Back in the mansion, people talk and there’s talking. Andi says that her 25 boyfriends are “awesome”. One of the guys is a farmer. Another guy named Marcus claims to speak German and Polish. He says one thing in German and is unable to speak any Polish. For some reason, Andi is still impressed by his lies.

Nick is totally surprised he gets the first impression rose. It looks like he can’t wait to tell his Mom about it. Nick seems nice. I feel bad for him that he’s on the show. Just as things are starting to get super fun, Chris Harrison comes in and chinks his stupid glass to announce the beginning of the rose ceremony. ABC plays super intense music for this moment. It sets the tone for intensity.

Mike with the hair says, “If I go home tonight without getting a chance to get to know Andi, it might rank up there as one of the worst feelings in the world.” I’m sure everyone who has been struck by lightning will agree with Mike. 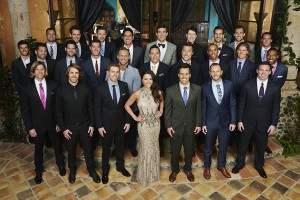 These guys are already in love with Andi

The Rose Ceremony is next. Keep up! Andi is super emotional and thanks her 25 boyfriends for a wonderful evening and her lamp. She gives out a bunch of roses until Chris Harrison comes out to tell her to stop.

Among the notables to get a rose are the Pantsepreneur, Markel the cookie/metaphor maker, Tasos the hi-fiver, spray-tan limo pusher, the guy with the face, stupid guy, jerk guy and his friend the jerk, and the Opera singer who has been planted by ABC to annoy people.

Among the notables to be eliminated are Mike with the hair, lamp guy, hair guy, jerk guy and his friend the jerk, golf guy who golfs, and others. Mike experienced one of the worst feelings in the world. I did too by watching this show, but you don’t hear me complaining about it.

A guy named Josh cries about being dumped by the girl he knew for 4 seconds. He’s super sad and kind of angry. He even swears. Luckily, ABC bleeped it. Josh does have a great quote to sum up 18 years of this show when he says, “This is stupid.”

We get a preview of the season to come. There will be boats, more boats, trains, clocks, castles, love, sledding, making out, drama, dramatic music to accompany the drama, guys pointing at guys while they yell at the guys, and some amazingly surprising stuff. Also, Andi cries a ton because this is so seriously real to her and anyone who says this is a joke is being seriously offensive.

You’ve read an entire Bachelorette recap, which either means you’re drunk or bored. Since you’ve come this far, go to this page and draft three Bachelorette contests to form a fantasy team. The scoring system is fun. It’s super easy and there will be prizes. My Dad has a team.