The ABC promos for this week’s episode promised tons of drama. “Promise” might be the wrong word. It was more of a threat. They have threatened us with drama. I… 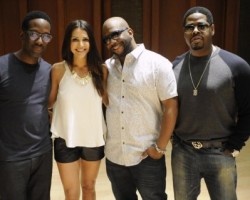 The ABC promos for this week’s episode promised tons of drama. “Promise” might be the wrong word. It was more of a threat. They have threatened us with drama. I don’t think you guys are even ready for the drama. Maybe you should take a Dramamine! Get it? Dramamine!

I hate you guys.

Andi Dorfman is still looking for love. I know what you’re thinking, “Still? Greg, she’s been looking for love for weeks. Who can’t find love when given a bunch of guys and a couple of weeks? Is she some sort of deviant or narcissist?” Wow, I can’t believe you guys were thinking all of that. Why don’t you calm down and just read this recap.

16 contestants are still in the ring to duke it out for Andi’s heart. Tonight is part one of a “special” two night special. It’s “special” like kids who eat paste. Andi’s fun bunch is in Santa Barabara. Chris Harrison tells the group they’re going to Santa Barbara and they all clap because guys LOVE Santa Barbara. Chris Harrison tells the guys to enjoy Santa Barbara. I hope they do.
Nick V. gets the first one-on-one date. He’s on my Fantasy Team. He doesn’t wear socks with his sneakers. They ride bikes, not camels, so no 5 points. It’s unclear where ABC got the bikes. I’ll bet they buy them and then return them the next day.

Andi is happy to have a normal date. It’s completely normal as cameras capture their bike riding. It happens before us, in living color. ABC even attaches a camera to Andi’s handlebars so we can see what it looks like when you’re directly under her chin. This is so real. 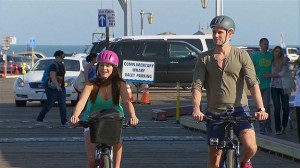 It’s hard to capture the excitement from this angle

Back on a mountain, Nick V. says he has a crush on Andi. Keep up! He’s all goofy around her and it’s adorable. They climb up a rock while maintaining possession of their glasses of alcohol. They reach the top of a rock and hold each other. Despite his loin-aching crush, Nick V. does not make out with Andi.

After bikes and rocks, Andi and Nick V. sit outside to eat on TV. There are zero cameras under their chins. Andi asks Nick V. why he’s still single. Nick V. admits to a 3-second engagement he had with a girl back home. We’ve all had those. Nick V. is taking things slow. Andi respects that. Guys, I’m pretty sure Nick V. is here for the right reasons.

Super soft piano plays while Nick V. talks about the potential for love and how making mistakes in the past allow you to learn how to love better. The collar on his jacket is popped while he makes these declarations.

Andi tells the camera that she has a connection with Nick V. and she gives him a rose. He accepts it. That seals it. If a guy isn’t on a date for the right reasons, he’s not going to accept a rose. They make out. One point. After some slobber, they go up stairs to slobber some more. This is so real.

It’s totally Boys II Men, at least three of them. I thought there were four Boys II Men. Maybe I’m thinking of Bel Biv Devoe. This group date would really take off if Another Bad Creation showed up… or Sudden Impact. Thank you for being the only person to get that. 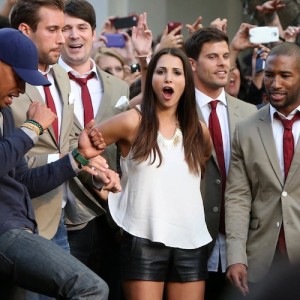 If you threw a bunch of puppies into a ball pit, it wouldn’t be this much fun

Brian exclaims that Boyz II Men made him fall in love a bunch of times when he was in High School. Eric the Explorer tells the camera that he touched his first butt to a Boys II Men song. This is so real.

Boys II Men have been brought in to teach the guys to sing in preparation for a live concert. None of the guys can sing. Boys II Men really has their work cut out for them. Andi can’t sing either. No one can sing. Why did ABC plan a singing thing with no singers. While practicing, Andi becomes more than a little flirtatious with one of the Boyz II Menners. It makes me uncomfortable. I’m not certain Andi is here for the right reasons.

The contestants get their shot to sing next. There’s a ton of bad singing. Even opera singer guy sounds terrible. We watch four minutes of ‘I’ll Make Love to You’ in its worst karaoke form. You can totally see why we needed two “special” parts for all of this “special” content. This is so real.

Andi gets the group together to drink around a fire. It’s the best way to date 16 guys. Spray tan Cody gets some one-on-one time. Andi plays a goof on Cody. She confronts Cody about having a girlfriend who is a stripper. Cody is super nervous until he finds out it’s a goof. It was totally a goof. You guys fell for it. Admit it. I can’t even stand how goofy Andi is. I gotta hang out with more district attorneys.

Eric the Explorer is the next to get some one-on-one time. He’s worried that he and Andi are falling out of touch. He doesn’t feel as close to his girlfriend who is dating 15 other guys as he did a week ago. Eric doesn’t feel like a panda in a room full of brown bears.

Marcus and Andi start talking. Four seconds later, they’re kissing. Keep up! One point for Marcus. With Marcus’s dinner fresh on her teeth, Andi takes Josh M., the baseball player guy to a fire pit and cuddles up with him for more smooching. They growl at each other while they make out. You should get more than one point for growly make-out sessions, but there’s no turning back. Josh M. gets the group date rose for his growling skills.

Going to commercial, the group sings more Boyz II Men while ABC dubs in wolf howling. Why do you read these?

Andi and JJ sit through a professional make-up session to appear older. This way, they can see what its like to grow old together. Considering Bachelorette relationships only last a couple of months, this is a really good idea. The make up guys do a very good job. Andi and JJ look old. 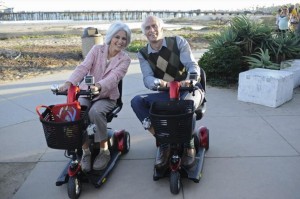 This is how much I aged from watching this episode

The happy old couple walks around Santa Barbara to freak people out. ABC stole this bit from Jackass. Andi tells the camera that she really feels like she’s getting to know JJ better from their make-up date. I can tell. They play football, make out and have fun as old people. Andi and JJ talk like old people. Please do not take this statement lightly; this is the worst episode in the history of this pathetic franchise.

Andi has a ton of fun being old with JJ and tells the camera how life would be a blast with him, especially if the ABC make-up specialists agree to live in their guest house for spontaneous park appearances. After crazy old people fun, they sit down to eat on TV, without old people make-up. JJ feels comfortable around Andi. There’s a ton of talking.

Andi gives JJ and his pants a rose. Then, they make out.

They continue to make out and talk like old people. JJ tells the camera that he loved his date and wishes it could have gone on forever. It did.

Back at the mansion, Ron gets a disturbing phone call. A close friend of Ron’s passed away and he leaves the show. His girlfriend’s other boyfriends all hug him goodbye and wish him luck. So, no more Ron.

The cocktail party is next. Marquel thinks that everyone deserves a rose. Marquel really likes all of his girlfriend’s boyfriends. It’s nice that they get along so well. I know I always make an attempt to be affable with the other guys my wife dates.

While Andi is talking with Eric the Explorer, a delivery guys walks in to bring her flowers and a note. I’m sure that there was no one at the front door to take the flowers on her behalf. The flowers are from Josh M. He was right in the next room. I don’t see why he couldn’t have just carried the flowers in himself. The Bachelorette leaves a huge carbon footprint.

We’ve been watching for an hour and a half and there has been zero drama. My ‘drama’ tank is empty. If drama was oxygen, we’d all be dead. Luckily, JJ and Josh pull Andrew aside to confront him about getting a waitress’ phone number off camera. It’s a total confrontation. Andrew is all sorts of confronted.

Andrew refuses to dignify their accusation with a response. He walks away. How are you supposed to confront a guy when he won’t stand still? JJ, Josh and a poor camera chase Andrew around the mansion while yelling about his lack of character. It’s confrontastic! There’s so much confrontation, the camera guy can’t keep up. Camera guy, like, needs a fast-speed shutter to capture the confrontation. The camera does get plenty of shots of JJ’s colorful pants.

Andrew doesn’t stand up for himself. You guys, Andrew is here for the wrong reasons. He gets 21 points. During the confrontationism, Josh M. says ‘connection’. One point.

Andrew is mad about being confronted by his friends/girlfriend’s boyfriends. Andrew says, “I sort of thought we were all in this together.” So, Andrew thinks that his girlfriend’s other boyfriends shouldn’t be concerned with his phone number collecting skills. This is so real.

The rose ceremony is next. The longest and most painful episode in Bachelorette history is almost over. A bunch of guys get roses. I do not recognize a bunch of them. Marquel says, “Yes, maam” again.

Andrew and his wrong-reasoned self got a rose. Things are about to get conFUNtational tomorrow. Get it, guys? You guys don’t get it. I hate you guys.

Please join us tomorrow for another recap. Judging from the preview, there will be a ton of screaming. I know you much you guys love screaming.

To see the update Fantasy standings, go here. Your team rosters will soon be added.