Chris Harrison asks the guys to talk about their dark places. 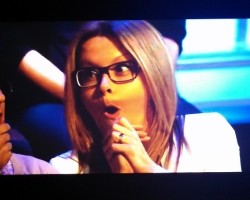 Bachelorette Recap- The Men Tell All

I’m not going to lie to you guys. My work Golf Tournament was today and I killed a lot of brain cells. Luckily, you only need two brain cells to watch ‘The Bachelorette: The Men Tell All’ episode. It’s terrible.

‘The Men Tell All’ episode of the Bachelorette is a chance for America to hear things that have not been told. The men tell all. Nothing is not told. I’m eager to hear the men tell me how lawn sprinklers work and why ‘Parker Lewis Can’t Lose’ got cancelled.

ABC doesn’t like you, so they bring out all of their contestants for a final chance at being in front of the camera. Chris Harrison will interview people like it’s his job. Audience members will cheer and boo. And there will be footage. There will be so much footage of things you’ve already seen. It’s amazing to me that a show with so much to tell would waste time telling things they’ve already told but, that’s the Bachelorette. This show has no rules.

There are 4 million candles on the set of ‘The Bachelorette: The Men Tell All’. We begin the worst episode of the worst show with a great quote from Chris Harrison that just about sums it all up, “Dez has had to handle guys with secret girlfriends and men who are clearly not on the show for the right reasons. But, despite all of the drama, Desiree has found 3 guys who she thinks could be her next husband.”

Nothing I type could say it any better than that.

Next comes some pre-taped fun. Chris Harrison and Dez take a camera crew to sneak up on random houses filled with women watching the Bachelorette. It’s a lot like ‘To Catch a Predator’. It’s super fun to watch people’s surprised reactions to Chris Harrison starring at them through their living room window. In every other house in America, people should the people who randomly burst their doors. On this show, people just excitedly scream.

ABC hates me so they bring back Ashley H. and her forehead to run around to random homes so People can scream. There’s screaming. This segment is 10 minutes of washed up reality TV stars opening doors, followed by screaming. It’s like a demonic Jack-in-the-Box.

Because we have two hours to fill and zero content, ABC allows Ashley H., Alli, and Emily Maynard to sit in a semi-circle with Dez to talk about the correct way to choose a man on television. This is valuable information for Dez, considering two of the women broke up with their Game show contestants four seconds after getting engaged and the other girl, Ashley H., was dumped three times in the course of her season.

They talk and there’s talking. ABC plays footage we’ve seen thousands of times. One important lesson is learned; men are scumbags and they can’t be trusted. It’s important, when dating 24 men at once, to weed out the ones who are just looking to be on television. The girls clink their giant wine glasses and say, “Here’s to putting guys in their place!” I wish my place was the bottom of a ravine covered with jagged rocks.

The guys talk about the friendships they’ve former with the other men who were dating their girlfriend. ABC plays clips from the season. We see Hashtag guy say ‘Hashtag’. We see the fake girlfriend come out to fake yell at a fake guy. We see dramatic footage of ‘Ben hating’. I’d apologize to you if this is your first time reading my recap and you didn’t know what ‘Ben Hating’ was but, you’re reading a Bachelorette recap. Did you really expect to understand any of this?

Brian was the guy with the fake, secret girlfriend. He skipped out on the ‘Bachelorette: The Men Tell All’ episode. I respect that because, he was not prepared to tell all and, if this episode is about anything, it’s about telling all.

29 minutes in, absolutely nothing has happened. Chris Harrison says, “This is just the tip of the iceberg”. This iceberg Chris Harrison refers to is worse than the one that sank the titanic.

The ‘hot seat’ portion of our show is next. The ‘Hot Seat’ is the chair next to Chris Harrison. It’s hot because the men sitting in it are exposed to tough questions and forced to tell all. It’s incredibly hot. It’s like sitting on an aluminum chair in July while wearing really high-cut jorts.

Ben is the first guy on the hot seat. Ben was on the show for the wrong reasons. Ben used his cute son to slurp with Dez and acted like a jerk. After he was dumped by Dez, Ben exclaimed that he was going to sleep with women who aren’t Dez. The audience boos. Ben’s seat is indeed hot.

Ben explains that he is not a bad guy. The disapproving looks shot out by the other men could scorch wood. The audience joins in with disapproving looks. You guys, no one approves. We all disapprove. As a journalist, I don’t like to take sides but, I’m on the side of good her. I don’t approve.

This woman does not approve.

ABC replays James being there for the wrong reasons. We see it… again. Chris Harrison asks James, to explain his wrong-reasonedness. James explains it. There are more women disapprovingly shaking their heads and also raising their eyebrows. We’re seconds away from women storming the hot seat with torches and pitch forks. America, in case you thought it was okay to go on a Reality Television show and date a woman who is also dating 24 other men, and not be there for the right reasons, you cannot. You will be put in a hot seat and be inundated with vicious, judgmental head shakes. They might take our guns, but they will have to pry our disapproving head shakes from our cold, dead … heads.

I’m going to jump ahead because there’s a ton of talking. At one point, Hashtag Casey says, “I swear to God, on my family, that I did not say any of that”. I’m sure God didn’t ask to be put into the middle of this. He probably has bigger things to deal with than whether or not some of Dez’s 24 boyfriends are there for the right reasons. I can’t be sure, though. I’m not God.

There’s an hour left in the show and I want someone to break into my house to steal my television.

There’s an open discussion about whether or not a guy is allowed to think about being the next Bachelor while being a current contestant on the Bachelorette. Keep up! The final verdict is… I don’t know. There was so much talking.

I pass out for a second and wake to hear Juan Pablo say, “My daughter or my sister, I do not want to date James right now. If he becomes a good James, I’m happy but, now, no my daughter. No my sister”. So, if you’re keeping score at home, no Juan Pablo’s daughter or sister dating James.

Chris Harrison asks the audience if James should be the next Bachelor. Women shout ‘No’ and pump their thumbs down. It’s a lot like the movie Gladiator.

The next segment is sponsored by Clorox. They call it ‘Bleachable Moments’. Get it? Moments you’d like to eliminate? Get it? Do you guys even get comedy? You’re all stupid.

“I love Juan Pablo. He has a daughter”- A guy who didn’t where a shirt.

Chris Harrison asks Juan Pablo what brought him on the show. Juan Pablo says that he wants a nice girl to be a mother for his daughter. He mentions his daughter a couple hundred times. They show us footage of Juan Pablo not wearing a shirt. Juan Pablo has gained a ton of steam and is angling to be a future Bachelor. There are women in the studio audience wearing ‘I love Juan Pablo’ t-shirts. I hope the guy at the kiosk in the mall laughed at them.

Shirtless Zak is on the ‘Hot Seat’ next. Zak is wearing a shirt. Zak was super goofy. You have no idea. ABC shows us Zak footage in case we forgot how goofy he is. I didn’t forget. I notice, in the subtitles of Zak’s journey, that ABC spells Dez ‘Des’. Have I been wrong this entire season? I’m not changing it. She’s Dez now and she’ll always be Dez.

Chris Harrison asks Zak to talk about his dark places. Zak says that he has trouble meeting women because he works on an oil rig. He should date Liv Tyler.

Chris Harrison pulls out Zak’s ‘black light’ journal and reads Zak’s poem out loud. Women in the audience make faces like they’re being made pregnant by Zak’s romantic journal words. Zak admits that he still loves Dez and Chris Harrison tells Zak he can say things to Dez.

Dez comes out and the audience goes ape-poop. Dez is wearing chain maille. Dez talks about the guys she has dumped. She disapprovingly shakes her head over a few of them. Dez yells at Ben for wrong-reasonedness. The audience claps because justice is being served; street justice.

Chris Harrison makes Dez talk to Zak, so we all have a final chance to cry. Zak is tan. Zak starts talking and tells America that he wrote a song. Bachelorette interns bring Zak a guitar. He sings his song. We are all forced to listen to his sad song about the woman he dated on TV who was also dating 24 other guys. Dez cries. Zak doesn’t cry because it’s his big chance to sing on TV and get a record deal. Zak’s song is about moving on. He’s moving on all right. He’s moving on to be a Bachelor! Zing!

Next, ABC rolls out the LOL bloopers. Dez hits her head on a lamp and falls down while roller skating. A grasshopper lands on a guy. Things get set on fire. A child swings a bat and accidentally hits a guy in the crotch.

It’s over. Next week is the season finale with an ending that Chris Harrison promises we will not see coming. Normally, the finale consists of 2 contestants and a Bachelor/Bachelorette. This season, three guys remain. I see nothing coming. This show has no rules. Actually, they’re calling it a 2-part finale event which, I think, means it’s just going to be two more episodes. That’s what you do when you put out a horrible television show with no content. You re-brand your finale to make it sound like it matters.

When ABC cuts from the finale preview to the studio audience, they show this woman and I laugh so hard my dog runs into the other room.

Betrayed by a Bachelorette Promo

While the credits roll, studio audience members make comments about who they would like to win the Game Show. One woman says, “I’m on Team Drew so, I feel emotionally connected to him”. I love the idea of ‘Team Drew’. Do you think that Buffalo might get an expansion ‘Team Drew’? Did you even read down this far?
Greg Bauch is the author of ‘Frank Dates’ and is shaking his head at you.