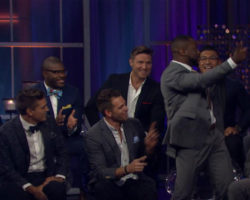 The Bachelorette Solves Racism As the Men Tell All

Chris Harrison also says, “It will be an unforgettable night.” Chris Harrison says this every single ‘Tell All’ and I cannot remember a single second from any one of them in the past 15 years. I forget the moments as soon as they happen.

We begin with a 15-minute flashback of past ‘Tell All’ seasons. These were unforgettable moments. I can’t believe how unforgettable everything is! You guys totally forgot these unforgettable moments, admit it. We should put these moments in a Folgers can and bury them near a school library so we can dig them up in 20 years and just laugh and laugh.

It’s time to re-introduce the ex-boyfriends to the studio audience. As Chris Harrison names names, the cat owners scream. I’ve heard less noise from a jet engine. One of my fillings shakes loose from the cat owners screams. They love these men so much that their screams could power a tractor. And, if you don’t think you could power a tractor with cat owner screams, wake up. You can.

Whaboom is introduced. I’m reminded how much I hate him. If this is your first experience with this show or my recaps, Whaboom is a guy ABC brought on the show to shout the word “Whaboom.” He’s a piece of shit, not because he was bad or anything. He’s just useless. They made him argue with some guy named Blake for no reason.

The forced, ridiculous battle between Blake and Whaboom is an insult, and this kind of crap happens every year. It’s garbage and uninteresting. I’m so sick of this age of instant gratification where people can’t even wait for actual programming content to develop, so it’s thrown in our face by mindless idiots who think fake confrontation is interesting. It’s the reason why we get questions on the Family Feud like “Name something your wife won’t put in her mouth anymore.” There’s no substance. It’s like the checkers scene between David Spade and Chris Farley in ‘Black Sheep’. I hate Whaboom and everything Whaboom stands for. If Whaboom falls into a well, I won’t even watch the Whaboom well coverage.

Next, some super relevant content. Chris Harrison points at DeMario and reminds us all about how DeMario had an ex-girlfriend interrupt the show to “out” him as a 2-timer. DeMario says that it wasn’t a girlfriend. He says that the woman was just a “side piece.” I’m picturing my mom Googling “side piece.”

The audience boos DeMario. He says, “You can boo me, but I’m keeping it real.” Finally, someone is keeping things real. I had a noose tied around my neck and was just about to jump off a folding chair because no one was keeping it real.

DeMario further denies that the woman was his girlfriend. It’s super denyey. There’s a bunch of yelling and Chris Harrison says something about having proof and all of the cat owners growl like someone just threw a piece of cheese on the ground. So, that happened. All is being told. It’s toldy. 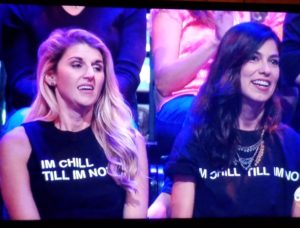 I have this shirt in 12 different colors.

The worst part of the ‘Men Tell All’ episode is the ever-evolving studio audience of cat owners. They now wear custom, goofy t-shirts like they’re on ‘The Price is Right’ or something. I wish I worked in a Kinko’s and saw these two women giggling through the door to get “I’m chill til I’m not” on a t-shirt. I’d refuse to help them.

The Kenny and Lee situation is next. I almost forgot about this situation. So far, we’ve got a taste of it, but we haven’t had the whole kitchen. Lee and Kenny fought a bunch this season. Blood was not spilled, but it was the most violent something could possibly be without actual violence. The other ex-boyfriends don’t like Lee. They’re on Team Kenny. You guys are on Team Kenny too, admit it.

Kenny is brought out to sit on the hot seat. He tells his side of the Kenny/Lee situation. Kenny is super sweet and smart and nice and everyone loves him so the cat owners all swoon because he’s the Kenniest. Next, there’s a bunch of talking. I hate it, even though Kenny is doing some of the talking. When he’s done, Chris Harrison brings out Kenny’s daughter and the cat owners throw up because this is just too sweet and endearing to hold your lunch in. How is there evil in a world with Kenny and his daughter?

Lee is next on the hot seat. There is silence because Lee is not sweet or nice. He claims that he’s just misunderstood, but I’m not falling for it. I shout out, “No way, Lee. Go to hell!” 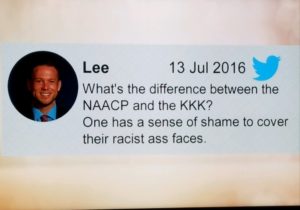 Chris Harrison reads some of Lee’s tweets. The tweets are sexist and racist. The cat owners are super mad at Lee. They boo and hiss. Some of them shake their heads. It’s super shakey. You guys don’t’ even know. I duck behind some furniture because I’m afraid of what might be thrown at Lee.

The guys grill Lee. They don’t like his racism. As Lee apologizes, the apology isn’t accepted because he doesn’t really apologize. He says, “I don’t like racism at all. I don’t like it. It bothers me.” For the record, racism also bothers me. Lee squirms and is all red. He does not like the hot seat. The seat is hot af.

Lee claims that the racist thing he tweeted was taken out of context because it’s half of a tweet. I believe him. I also believe that the other half of the tweet contained the N word.

Lee is confronted about his racist ways. Rachel’s ex-boyfriends stand up and shout things. Cat owners are shaking their heads at alarming rates. I’m not certain the earth is still on its axis. Lee is being forced against his will to keep things 100. He’s says, “I want to learn.” He admits he was racist and says that he’ll change. The ex-boyfriends clap for Lee and tell him that they’ll help him get better. So, Lee will get better, you guys. The Bachelorette is going to fix Lee. Lee and Kenny hug. I totally did not expect the world to be a better place during these two hours. THIS IS THE MOST UNFORGETTABLE EPISODE OF THE BACHELORETTE EVER!!!!!!111!!!!!!1ELEVENTY!!11!!!!

My favorite part of the whole Lee situation was how self-righteous Chris Harrison is. He talks down to Lee and demands answers, but the point is never made that these tweets were posted in July of 2016. There’s no chance that ABC casts someone for their big TV show without researching that person first. Lee only has about 1,200 total tweets. It’s not like they would have had to dig far to find the racist stuff.  I’m positive ABC knew he had racist twitter posts and probably brought him on the show so they could have their big ‘Tell All’ moment. I don’t really care, but it’s worth pointing out that Chris Harrison is the worst.

Dean gets the next turn on the hot seat. I hope the seat has cooled off a bit since Lee was sitting there. Maybe ABC gave Dean some oven mitts to sit on. You could bake a lasagna on that seat.

Chris Harrison shows Dean the stupid coverage of his hometown date and then Rachel dumping him. Dean had problems with his dad, and we watched it for the second time. I’m sure he appreciates watching it all again. It looks super comfortable. The seat is no longer hot, its icky.

Dean talks about his journey. I hate his journey. I’d rather hear about the journey of my poo through my colon. There’s so much talking. Dean pours his heart out while Chris Harrison nods. It’s noddy. After the talking, it’s announced that Dean will be on Bachelor in Paradise. I thought that was cancelled? Oh well, I’m not going to watch it.

Next, Rachel comes out. The cat owners scream because Rachel is just the best. My wife and I hold up a “We Love You Rachel” sign but I don’t think she can see it. Rachel talks about how much she misses her boyfriends. She doesn’t miss Lee. She tells him he shouldn’t have been racist. Lee agrees. It’s agreeey. Lee apologizes to Rachel and Rachel accepts his apology. Lee says that he’s learned tonight how great the other boyfriends are. I think we’ve all learned something. I’m not sure what I’ve learned, but I can’t wait to finally learn what I learned. That’s going to be an A-ha moment.

Next, some guys I’ve never seen before talk to Rachel. It happens and we watch it. Just as I’m about to jam the business end of a hammer into my throat, Chris Harrison shows us THE BLOOPERS! The bloopers are so super hilarious and fun. I laugh so hard that one of my ribs break. It hurts terribly, but it’s so worth it because the bloopers are the best. I look over at my wife as the bloopers are going on and she’s laughing, but she’s not super laughing, so I’m going to be looking for a new wife because fuck that.

The show ends with a preview of next week’s finale. It’s just a taste of the finale, not the whole kitchen. I just want this to be over. At least there’s no more racism anymore.